12 words and phrases you will hear in Extremadura 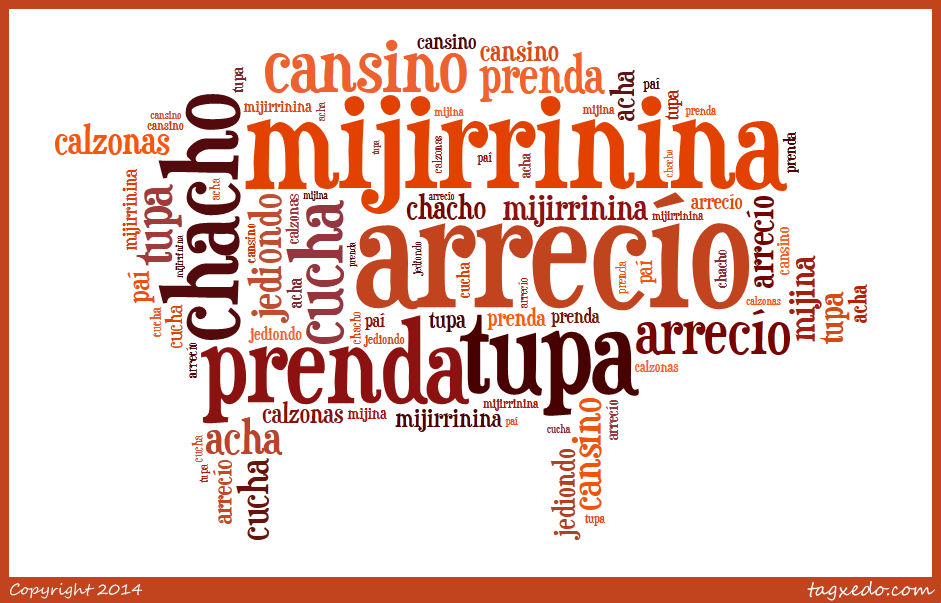 When travelling abroad it’s always useful to be able to understand and say a few basic things in the local language. You might already speak a bit (or a lot) of Spanish, but you will not find the words I’m sharing with you today in any Spanish coursebook. Have a read at the list and acquaint yourself with some of the things you will most probably hear during your trip to Extremadura.

Example of use: No puedo comer tarta, que estoy a dieta. Ponme solo una mijina.  (I can’t eat cake, I am on a diet. OK, but I will have just a tiny little bit.)

This word is the exact opposite of mijina and means ‘shedloads’. It is frequently used in expressions like pegarse/darse una tupa de (+ sth), which translates as ‘to stuff oneself with something’.

Example of use: Me di tal tupa de comer que luego no podía ni moverme. (I was so stuffed from all the food that I could not even move afterwards.)

In standard Spanish prenda means ‘garment’ and in colloquial Spanish it’s used to refer to someone as ‘unreliable’ or ‘untrustworthy’. However, in northern Extremadura (in La Vera area, to be more specific), this word has a very particular meaning. People use it to refer to their conversational partner with some degree of affection, whether the other person is man or woman, young or old. In some particular contexts it could translate as ‘darling’, although prenda is used by anyone to refer to anyone, anytime, which makes it practically untranslatable.

Example of use: Mario, prenda, dime la hora, anda. (Mario darling. Could you tell me the time?)

In English, you would only refer to Mario as ‘darling’ if he was someone really close, such as a boyfriend, husband or son.

In Extremadura you do not need to have a close relationship with someone to call him/her prenda. It can simply be an acquaintance, but you can say it when asking the person for something but you want to be polite, for example.

It’s the short for muchacho, which means ‘young boy/girl’ and in Extremadura (mainly in Badajoz province) it is used to call someone or catch someone’s attention. Chacha is the word used for women.

Example of use: ¡Chacho! ¡Ten cuidado, que casi me atropellas!  (?? Be careful, man! You almost ran over me!)

In the Vegas Altas del Guadiana area (Don Benito, Villanueva de la Serena, etc.) you will hear an ever shorter version, acho (acha). Apart from the meaning described above, it also denotes surprise or shock and is often used in the expression acho, tío (acha, tía).

Someone that says paí can only be from Extremadura. It’s a short version of para allí or para allá, which means ‘in that direction’. But not only that – Paí is also (wrongly) used instead of ‘por ahí’, which means ‘around there’ or ‘more or less there’.

Example of use: ¡Vete paí, pesado! (Get away, you are such a pain!)

I learnt this word when I moved to Don Benito at the age of 15 and it is a distinctive local term. In standard Spanish the main meaning of aparente is ‘looking something it is not’ or ‘convenient, appropriate’, but in Don Benito they use it to describe a nice and likeable guy/girl.

Example of use: He conocido a la novia de Ramón y es muy aparente. (I met Ramón’s girlfriend and she is a very nice girl.)

Jediondo means exactly the opposite. The correct word is hediondo (the pronunciation has been distorted), which means ‘smelly’, but in Badajoz province it refers to someone unfriendly, unkind and even rude.

Example of use: Me vio cruzar la calle y ni siquiera me saludó. ¡Menudo jediondo! (He saw me crossing the street and did not even say ‘hi’. He is so rude!)

In standard Spanish the expresion tú verás/pues tú verás is used in situations when somebody is telling you something you do not particularly agree with and asks your opinion. By saying pues tú verás you are telling that person you do not agree with that, but it’s up to them to do that and they will face the consequences.

In La Vera area (in northern Extremadura) they use it as a synonym of ‘of course’.

Example of use: — ¿Estás seguro de eso? (Are you sure about that?)

It comes from arrecido, which means ‘frozen stiff’ or ‘absolutely frozen’. Even if it’s a standard Spanish term, it is not very common outside Extremadura.

Example of use: Qué frío hace hoy. ¡Estoy arrecío! (It is so cold today. I am frozen stiff/absolutely frozen!)

The main meaning of this word is ‘a man or animal whose ability to work has been diminished by tiredness’.

However, in Extremadura (specially in Badajoz province) it’s used to describe someone that is too insistent, a real pain.

Example of use: Qué cansino eres. Me has preguntado eso ya cuatro veces. (It is the forth time you have asked me that. You are such a pain in the neck!)

It’s a short version of escucha (listen), but in Extremadura it’s often used to mean ‘look’.

Example of use: ¡Cucha ese tío qué camisa más fea lleva! (Look at that guy. What a horrible shirt he is wearing!)

If you look this up in a dictionary you will see this word (either in singular or plural) refers to a particular type of shorts used specially by a picador (a type of bullfighter that rides a horse) or a shepherd.

In Extremadura we use calzonas to refer to any kind of shorts, which in standard Spanish would be pantalones cortos.

Example of use: Hace mucho calor. Hoy llevaré calzonas. (It is too hot. I will wear shorts today.)

Although not all these words and expressions are used all over Extremadura, you can play with some of them in the same sentence and you can say things such as:

Acho, Pedro. Eres una mijina cansino, ¿no? Vete paí. (Pedro, you are a real pain in the neck, mate. Go away.)

No sé cómo están juntos. Con lo aparente que es él y lo jedionda que es ella. (I cannot believe they are together. He is such a nice guy and she is just so rude.)