Extremadura is all about nature. If you like walking take note of today’s suggestion in the north of the region. You won’t be disappointed.

During my last trip to Extremadura I decided to include a day of walking in the Garganta de los Infiernos Nature Reserve, in Jerte Valley. Five hours of walking, followed by a picnic by the river. Perfect day, really.

Despite its daunting name, which translates as ‘Stream of Hell’, this Nature Reserve has nothing of hellish. It’s a protected area of great beauty located in the northeast of Extremadura, surrounded by the Tormantos mountain range, the Gredos mountain range and River Jerte.

Some areas are as low as 300 m over sea level and others are as high as 2,000 m, which creates its own microclimate. Here you can see very different types of trees, such as chestnut trees, cherry trees, Cytisus oromediterraneus (piorno serrano) and even alpine pastures. It’s not uncommon to bump into a herd of goats and fishing is allowed in certain areas. If you like birdwatching take some binoculars with you, as you will be able to see birds of prey such as white tailed kites, imperial eagles or griffon vultures.

Some of the most interesting places to visit are its three glaciers —Glaciar de la Serrá, Glaciar de San Martín and Glaciar de Asperones. However, the most popular places of all is Los Pilones, an area of great natural beauty with deep potholes formed by the erosion of rock by the water running down the mountains. 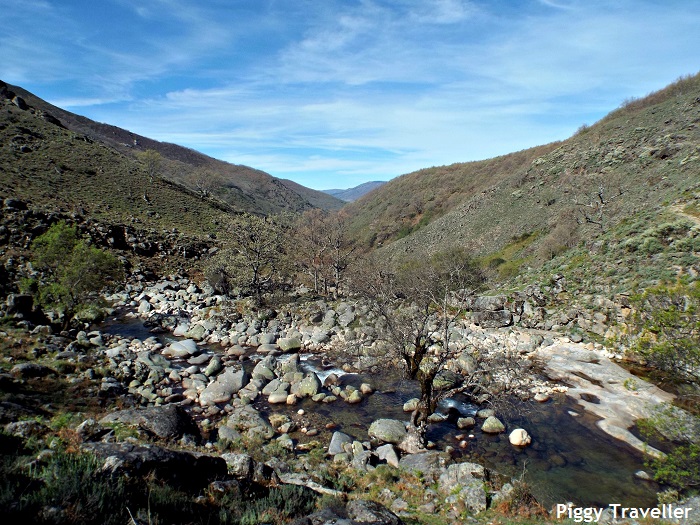 There are five official routes in the Reserve and most of them start at the Centro de Interpretación, on Ctra. N-110 between Cabezuela del Valle and Jerte. You can see them all in the picture below. 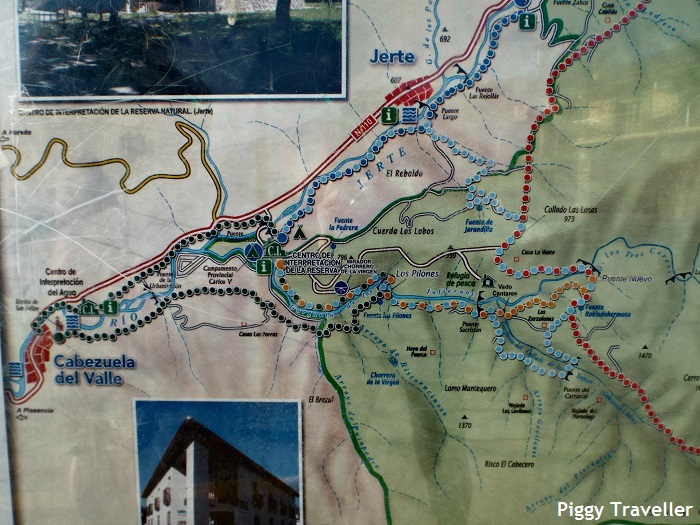 We went for the 5-hour circular walk (light blue on the map).

The most popular route is a short 3-hour (return) walk to Los Pilones, which is also part of other routes.

We opted for the long 5-hour circular route (light blue on the map). We visited Jerte at the beginning of April during its popular Cherry Blossom festival. The guy at the apartment we were staying at recommended starting the route in Jerte town instead of the Centro de Interpretación to avoid meeting all people going to Los Pilones.

We followed his advice to a certain point. We crossed the puente Largo, as told. But, when we arrived at the starting point I had an idea. If we walked in the opposite direction (taking the first turn left) we would start with an uphill walk among cherry trees in full bloom and would only encounter people at the end when reaching Los Pilones. So that’s what we did and I certainly think it’s the best way to do it.

We left after 9 am. The air was nippy and it felt a bit cold in the shade. The white flowers of the cherry trees made an impressive contrast against the blue sky and I couldn’t help but stop a few times to admire the landscape and look back at Jerte as I continued uphill. 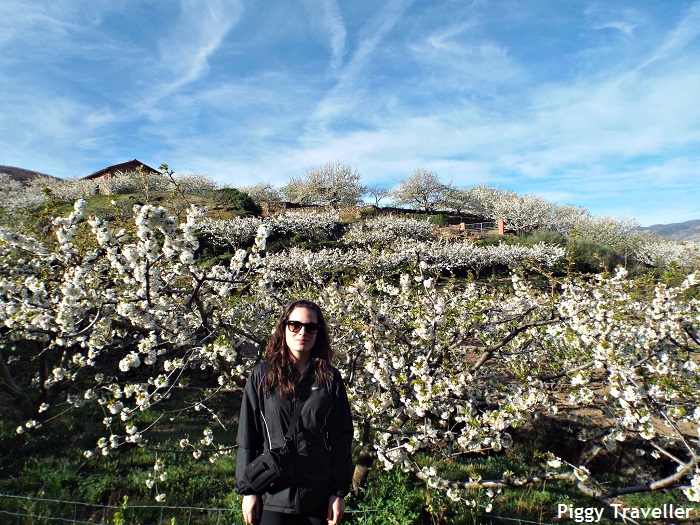 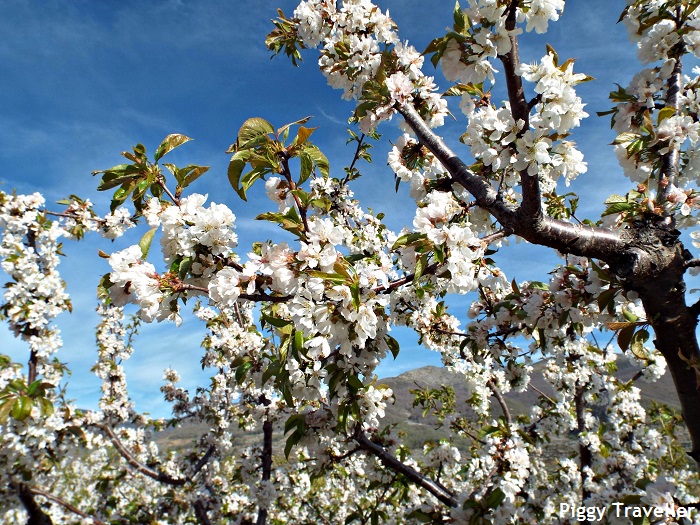 I must say I am not used to long walks, so I found it a bit difficult to handle the steep walk uphill. The terraces of cherry trees gave way to a forest of chestnut trees and Jerte town wasn’t in sight anymore. 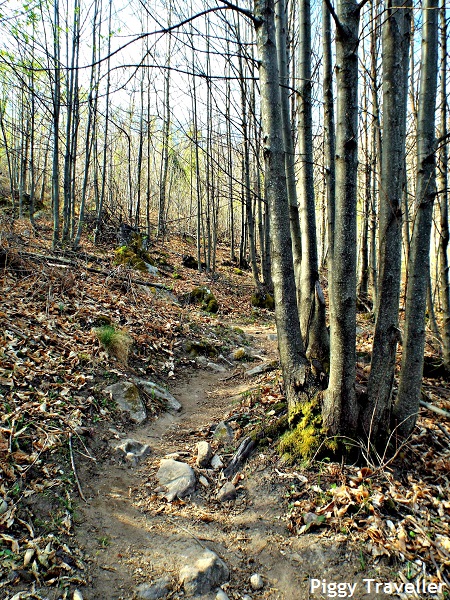 By the time we reached the highest point in our route the sun was shining and it was a bit too hot already. The landscape opened up and we could enjoy amazing views of the mountains and the valley down below. That’s when I realized doing the walk in the opposite direction had been a great idea. If you follow the official instructions you will have that mountain in sight along the way and would have to look back to enjoy the view. In my opinion that kills the ‘wow’ feeling we had when reaching the highest point without knowing what to expect next. 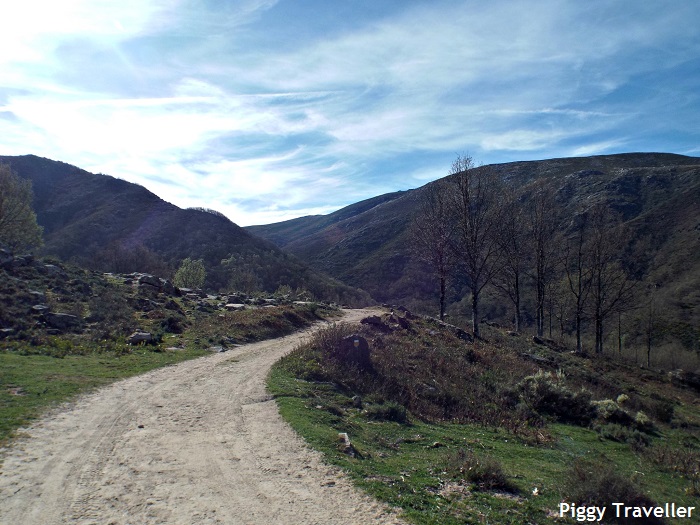 After the walk up it was time to walk down. The sound of the waters running down the mountains was very intense. We could feel the freshness of the waters coming up and temperatures started to lower. 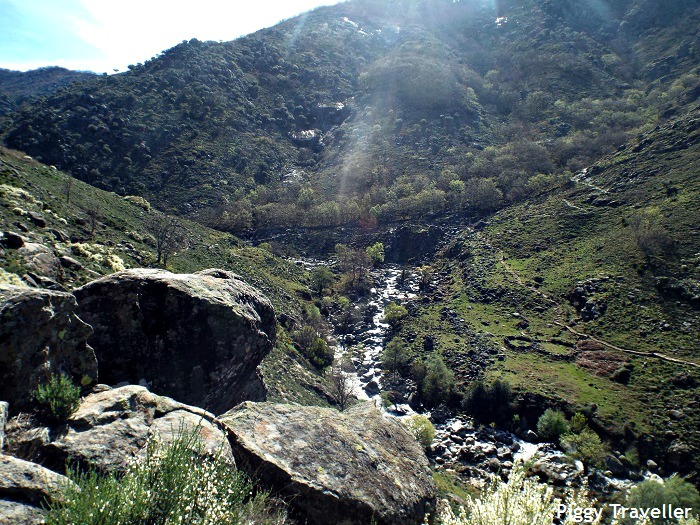 It was way too bright to take good pictures!

At the bottom there was a bridge we needed to cross. The rest of the journey until Los Pilones would be along the river, which was appreciated, as it was really hot at times. On our way we bumped into a herd of goats. There must have been around 200 of them and we found ourselves surrounded by goats whilst my shoes were sniffed by a kid. 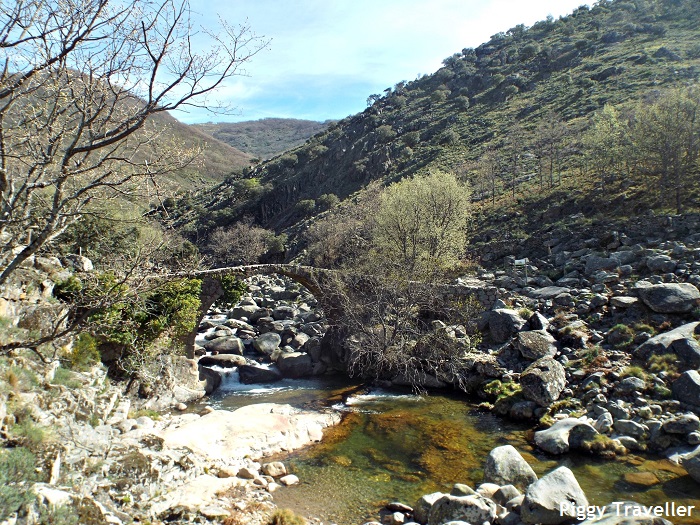 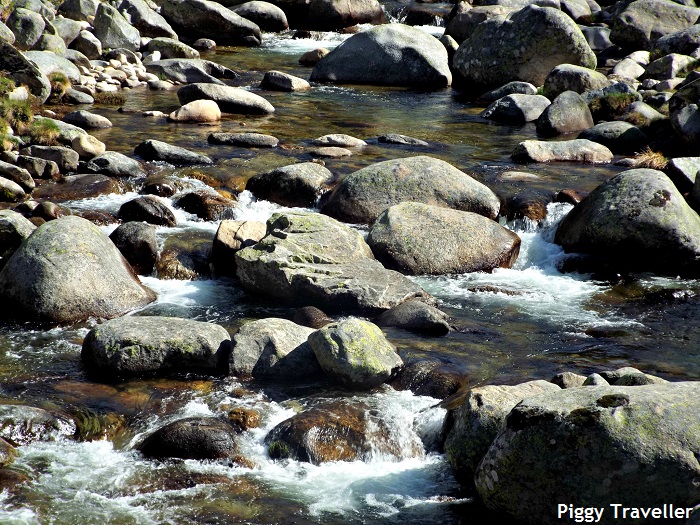 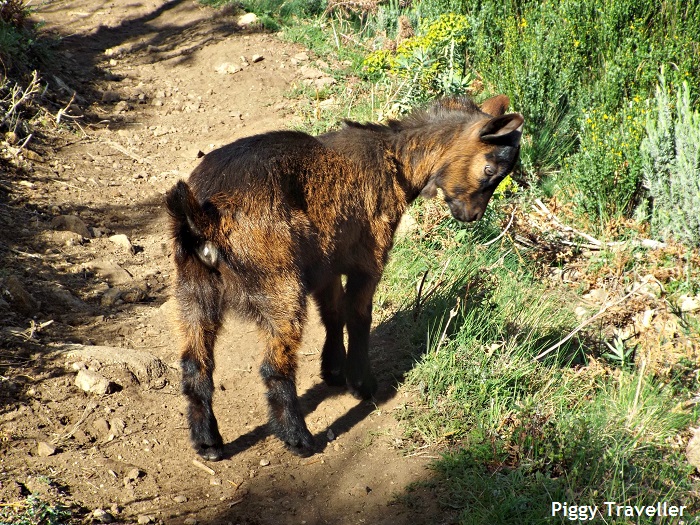 We arrived at a pool of water at lunchtime and decided it was perfect timing for our little picnic. There was a group of 3 crazy people swimming. I say crazy because the water was so freezing it took us three attempts to cross to the other side to continue our route. But remember, we visited the Nature Reserve in April. If you decide to go in summer make sure you pack your swimming suit. A swim in one of their natural pools is the best reward you can get after the long walk! 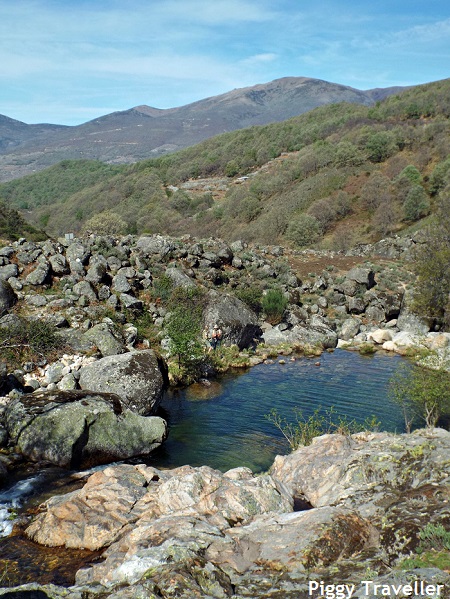 As we were getting close to Los Pilones we started encountering more walkers. Los Pilones is quite an impressive place that has appeared in several of those ‘X beautiful nature spots in Spain you can’t miss’ articles. From the little bridge over it you can admire the potholes and the water rushing down. The rest of the journey (about 1 hour) to Jerte is downhill, which is good. 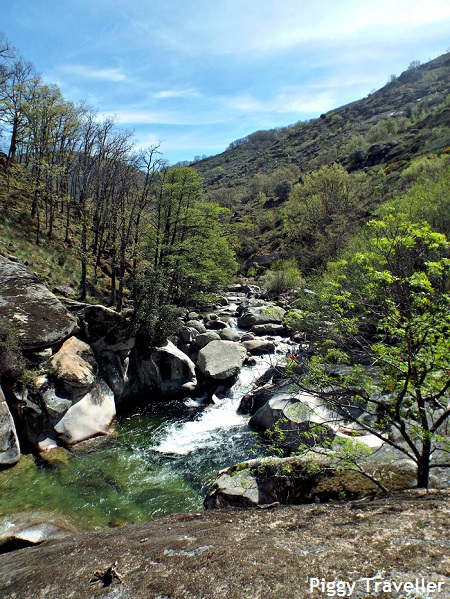 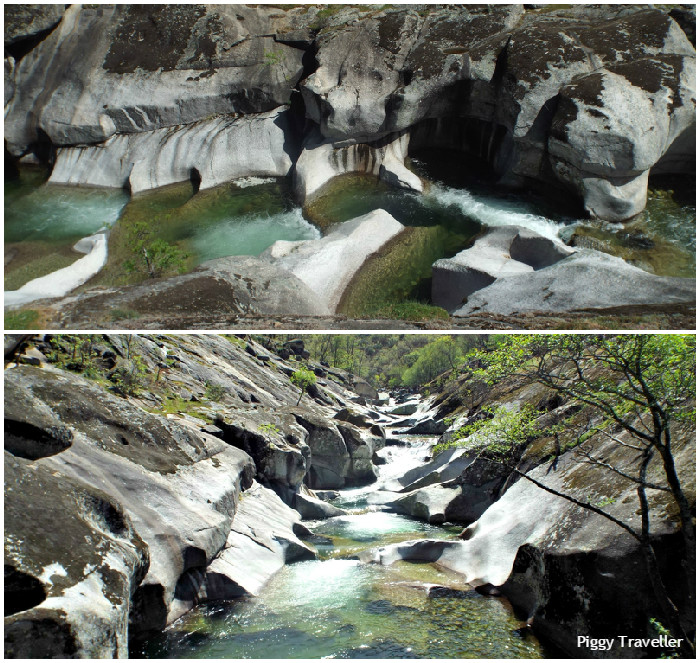 Visiting the Garganta de los Infiernos Nature Reserve in spring is a unique experience. I loved walking uphill among cherry trees in full blossom, the smell of the flowers and the waters running down with violence. The temperatures were ok (around 27 degrees).

Summer is the best time to visit if you want to swim. However, it will be too hot for such a long walk (+35 degrees) in the open air. It might be wise to do a short walk followed by a swim and a picnic in the shade.