Plasencia, the city with two cathedrals in one

Many cities have a cathedral. Some of them even have two or more. Plasencia, in northern Extremadura, has two cathedrals in one. Which other city in the world can say that?

During my last visit to Extremadura to attend the #TBMPlasencia I had the chance to join a guided tour through one of the most interesting buildings in this Spanish region. From the outside, Plasencia’s cathedral looks like yet another cathedral, but if you walk around it you’ll soon discover what’s special and unique about it. There are actually two of them! 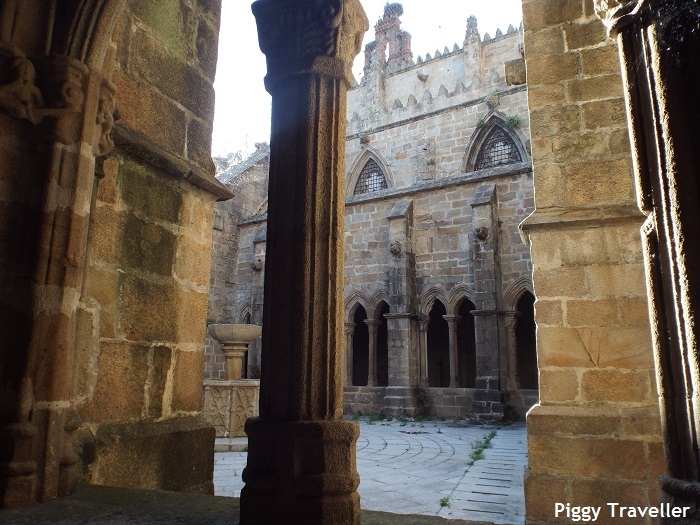 Why are there two cathedrals in one?

In the 15th century Plasencia had a cathedral, but it was decided to replace it with a newer and bigger one. Instead of demolishing the old cathedral first and building the new one from scratch, they simply started replacing one cathedral with the new one, starting at the front. They used stones and other materials from the old cathedral to build the new one, but they ran out of money and the project was never completed.

A huge cathedral made up of two halves, built in two different architectural styles. 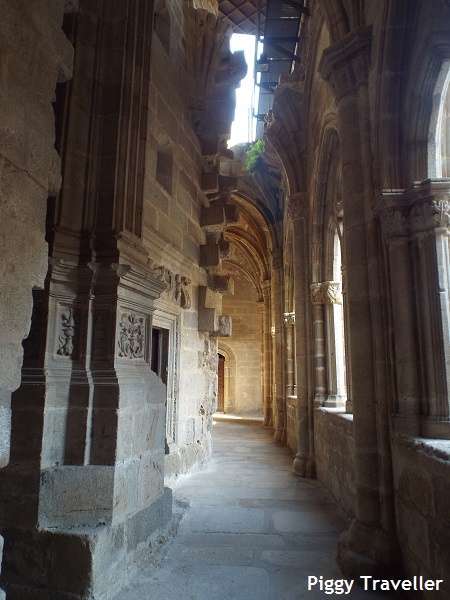 This is where the two cathedrals converge.

The work to build the old cathedral began in the 13th century and finished in the 15th century. It displays a transitional style between late Romanesque and Gothic art. The style of the façade is simple and there is a Gothic-style rose window over the door. Instead of having the more traditional stained glass, it is filled with thin alabaster. The old cathedral occupies the rear part of the ensemble and it preserves three naves without an apse, a chapel and an unusual tower known as Torre del Melón (The Melon Tower, don’t ask me why).

Today it houses the cathedral museum, where you can see a collection of religious paintings and sculptures. 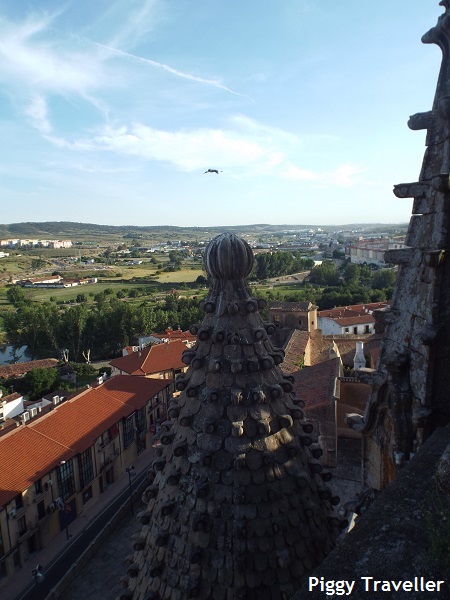 Torre del Melón (and mamma stork coming back with food for her babies).

The work to build the new cathedral began in 1498 but was left unfinished in the 16th century. It displays a Gothic-Renaissance style and an impressive interior. This huge project involved some of the most well-known Spanish architects of the time, who wanted to recreate a palm tree forest in heaven inside the cathedral. The pillars supporting the domes are golden and don’t have any horizontal elements that break the vertical design harmony in the cathedral. It’s as if the palm trees wanted to reach God and it’s easy to imagine how impressive the cathedral must have been, with its golden pillars and sky blue domes. 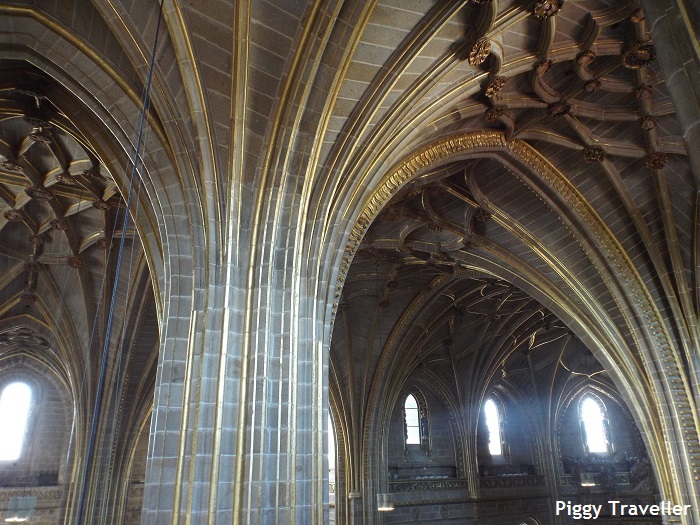 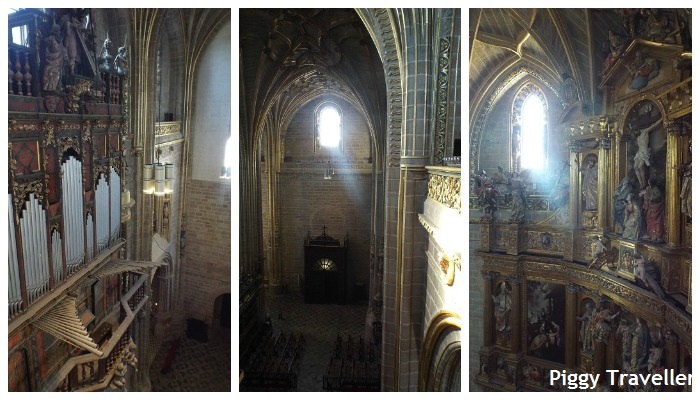 After the tour inside the cathedral we were taken to the roof, which is normally closed to the public. Storks have made their homes on top of towers and pinnacles. It was such a great experience to walk around and have baby storks barely two metres away from you, curling up in their nests waiting for food. The nests are absolutely massive and we were told they are a threat to the roofs, as they can be as heavy as 500 kg! 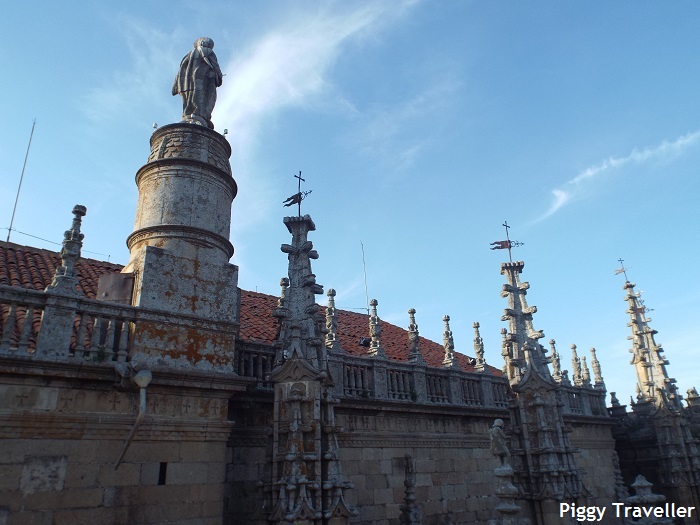 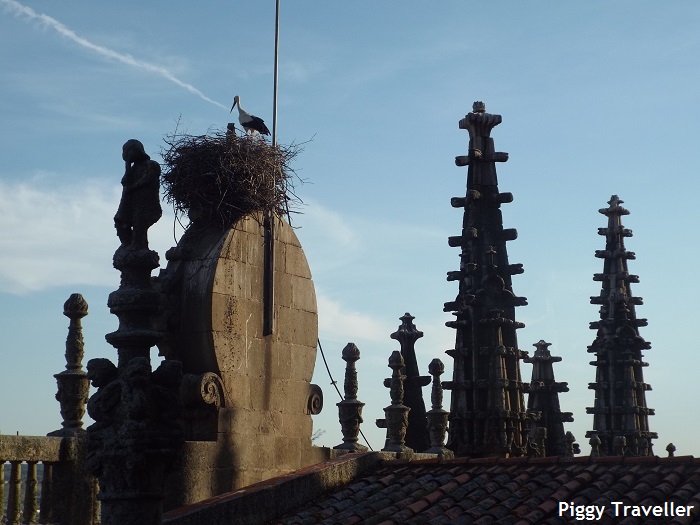 Storks have made their home on the roof.

One funny moment during our visit was when the bishop came to say hi in the cathedral.  He wanted to welcome us to Plasencia and to thank us for visiting the city and sharing our views in our blogs. He didn’t have very clear the concept of blog though, but got really excited when I told him where I’m from. Charming.

I visited Plasencia last December but, for some reason I can’t recall right now, I didn’t enter the cathedral. I’m glad I did on this occasion, because it’s well worth to see it. So make sure you don’t miss it if you plan a trip to Plasencia!