Fregenal de la Sierra, or the bullring inside a Templar castle

For a small town of just 5,000 people, Fregenal makes quite a good tourist destination for a day visit. Expect a charming main square, several churches, a convent with a cluster and tons of houses which have seen better times, but still keep an imposing appearance.

Oh, and expect to see a covered market and a bullring inside a 13th century castle. Something to add to your ‘Quirky/Weird places visited’ list.

Fregenal is located in the very south of Extremadura, in the Badajoz province. It’s very close to Andalusia and you can reach it by car from Seville in less than 2 hours.

That’s exactly what we did during our spring road trip. We flew to Seville, visited the city and set off to Extremadura. Fregenal was the second stop in our trip. 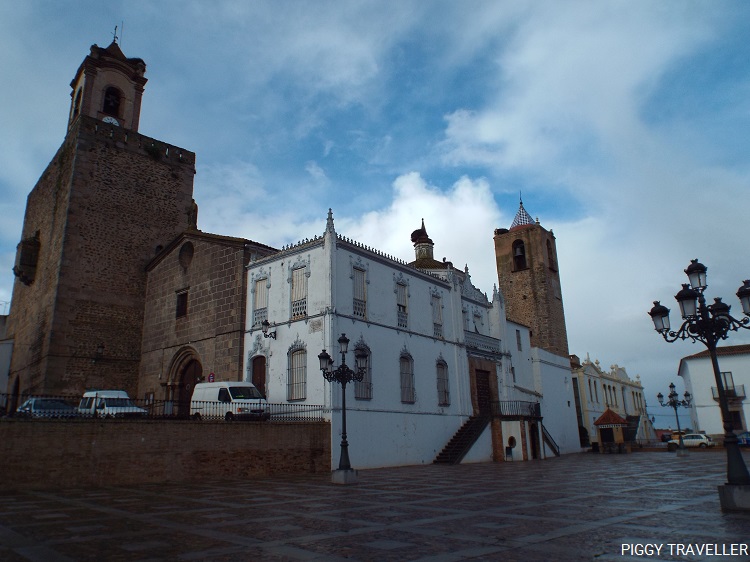 What to see in Frenegal

The main tourist attraction in Fregenal is more than just a castle. It’s an architectonic complex comprising a fortress, a covered market, and even a bullring. It dates back to the 13th century, and belonged to the Knights Templar; however, remains from the Moorish and even the Roman times have been found. This means the castle was actually built on the remains of an even older castle. 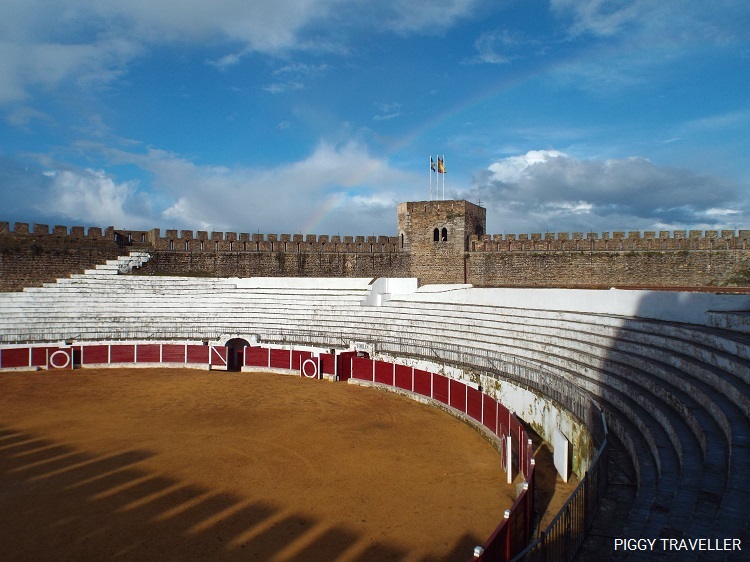 The access to the castle is through the Tourist Office and the entry is free. There are some leaflets (in Spanish) you can take and read, but they need to be returned to the front desk before you leave.

The first floor leads to the covered market, an 8-side structure built around a central outdoor patio area. It was empty when we visited it, but is still functioning. Pop by in the morning on Tuesdays and Fridays to buy some local fresh produce. 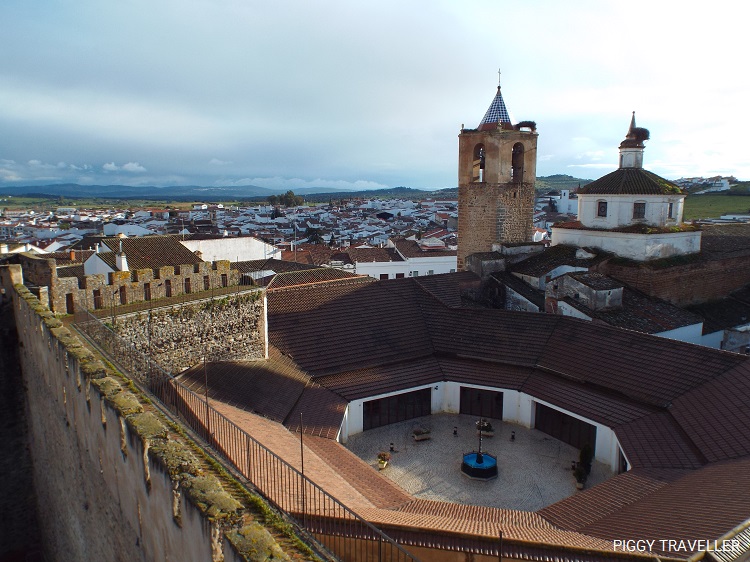 From the covered market, you access the castle. The sight of the bullring surrounded by the fortress walls and seven towers is surprising, to say the least. As mentioned before, the castle as it is dates from the 13th century. As if to add a little bit of fun to it, the bullring was built at the end of the 18th century and the covered market was added at the beginning of the 20th century. You normally don’t expect to see anything more than a courtyard within a castle, but here you can spot many things from the wall–a bullring, a covered market, a keep, and the top of the adjacent Santa Maria church and the Rectory. 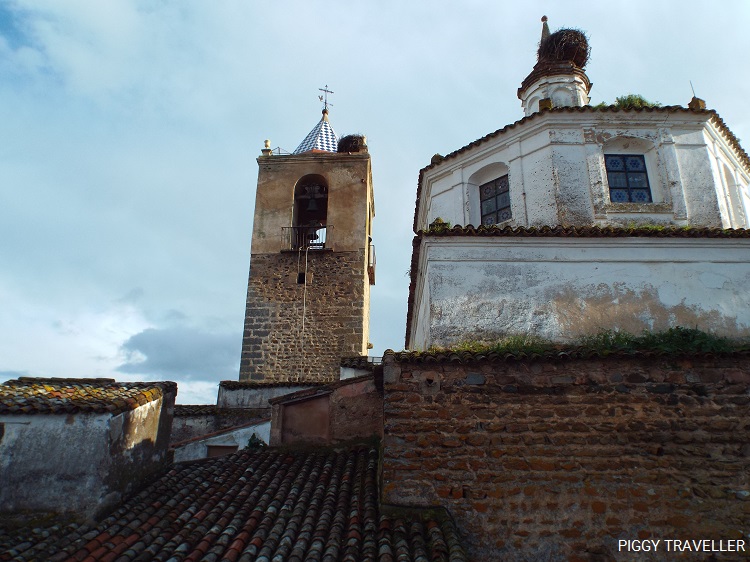 You can walk around on the walls as you please, so make sure you do so and take pictures from every angle. We were the only visitors to the castle in the evening, which is always good. No tourists, no noise, no queues and no pressure to be kicked out. 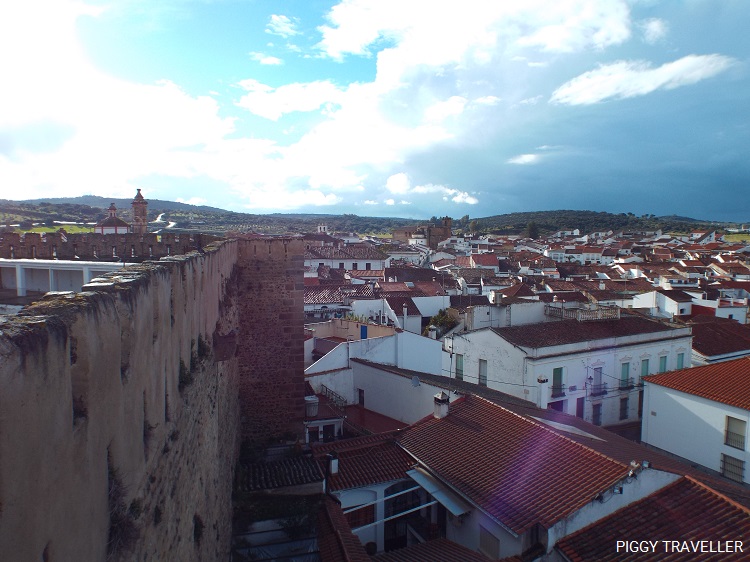 This convent, located on the western part of town was founded in the 16th century. It was expropriated by the state in the 19th century, but not the adjacent church, which continued to be open for a few decades until part of the roof collapsed. For some years, the building served different purposes (school, town hall…) but it was neglected and deteriorated quickly. It was not until 1995 that a big restoration project began. 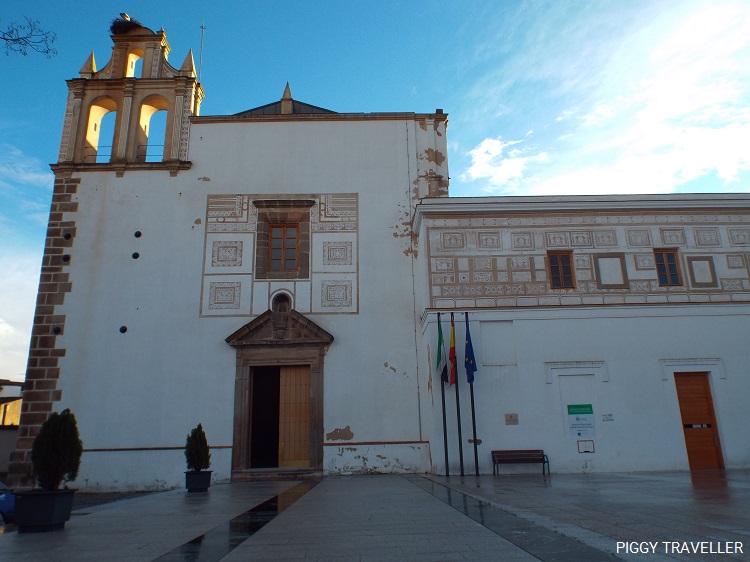 The access to the convent is from a big square off Plaza Fuente Miranda street and the entry is free. The renovation works make quite an impression. The vaulted ceilings of the former convent have been restored using waffle-looking wooden structures, and I still haven’t decided whether I like them or not. 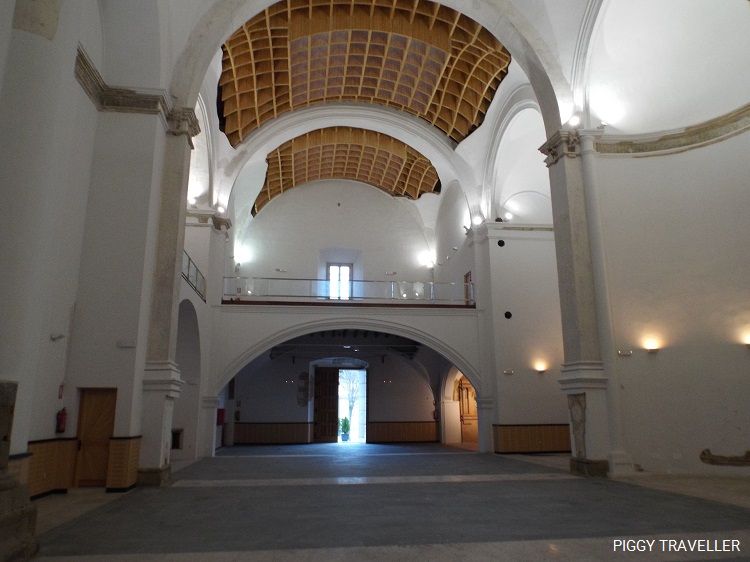 From the back of the convent you go through doors and walk up the stairs leading to the cluster, which is, in my opinion, nicer to the eye. 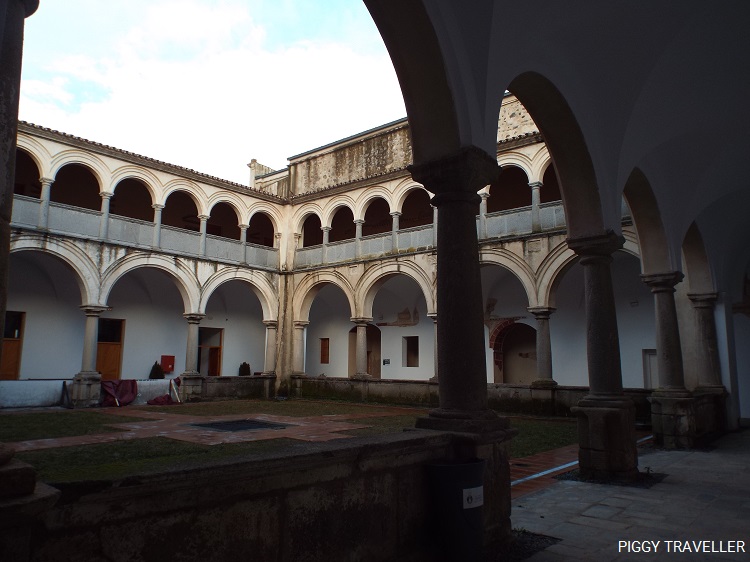 Once you’ve visited the convent walk up Plaza Fuente Miranda, turn left to Calle Bravo Murillo and then right to Calle Pastrana. At the end of the street stop on the corner between Marqués de Riocabado and Iglesia de Santa Ana to contemplate the Conde de Torrepilares palace (calle Iglesia de Santa Ana 1). This enormous and whitewashed 18th-century house displays vases-like sculptures on the cornice. You can also see the family coat of arms over a splendid and ornate balcony built using wrought iron and green glass. 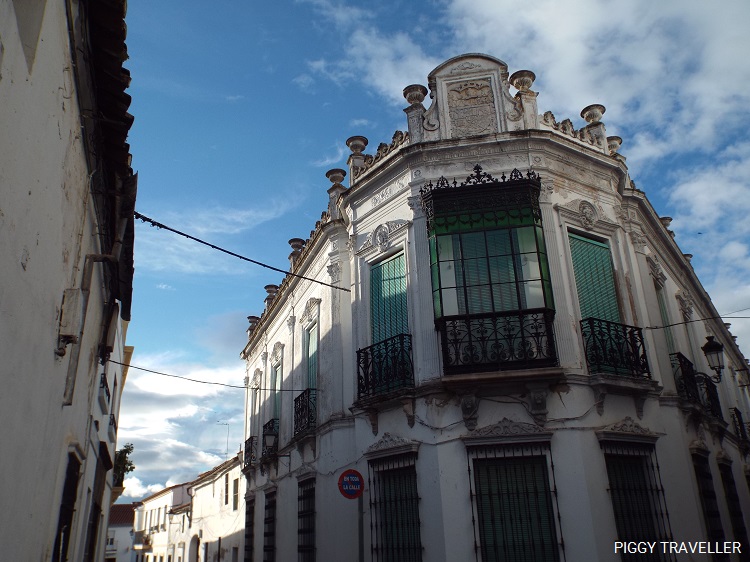 Keep walking along the street until you reach Santa Ana square, home to the biggest church in town. Unfortunately, it was closed when we visited Fregenal. After that, visit the lovely Fontanilla square and its fountain and then simply wander around. Pay attention to the little details; you’ll find everything from leafy private courtyards you can spot from the street to majestic-looking entrance halls decorated with traditional and colourful tiles. 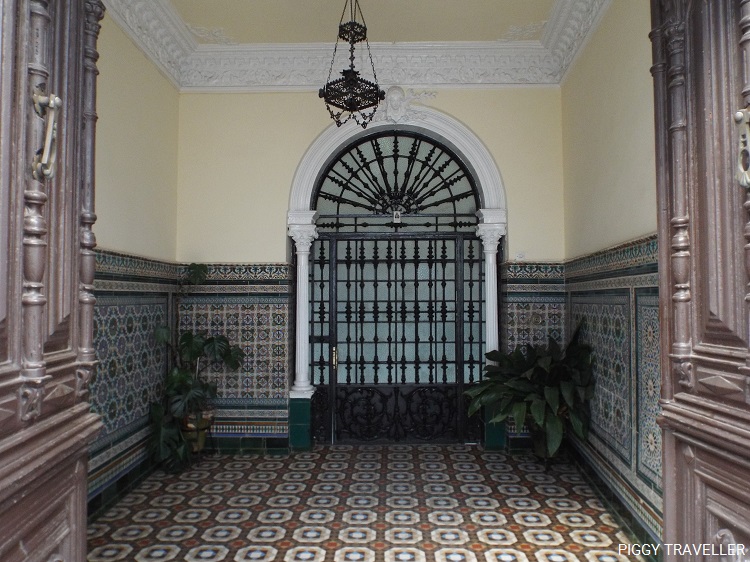 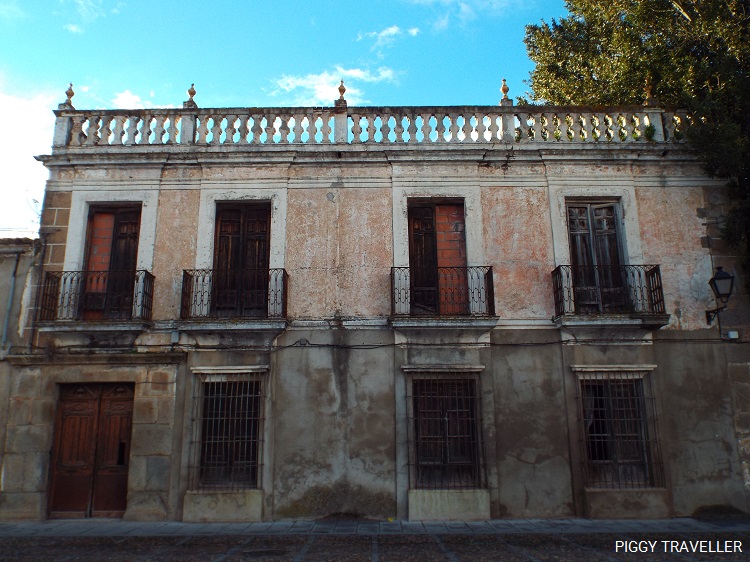 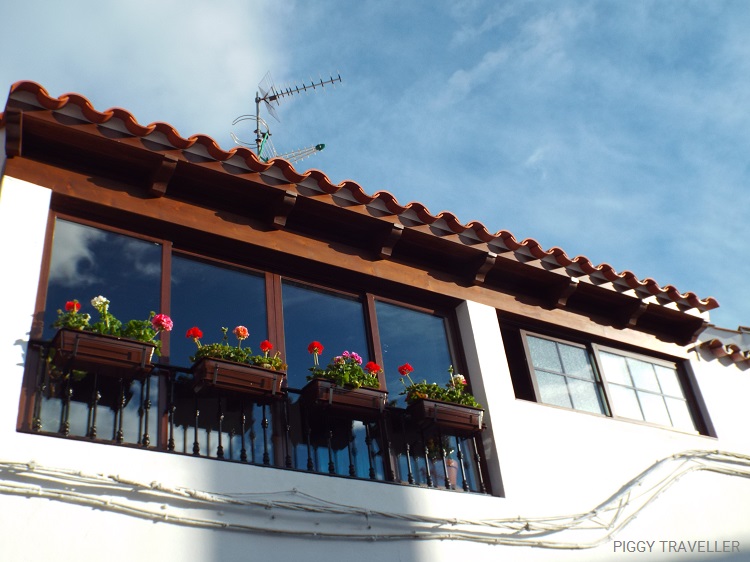 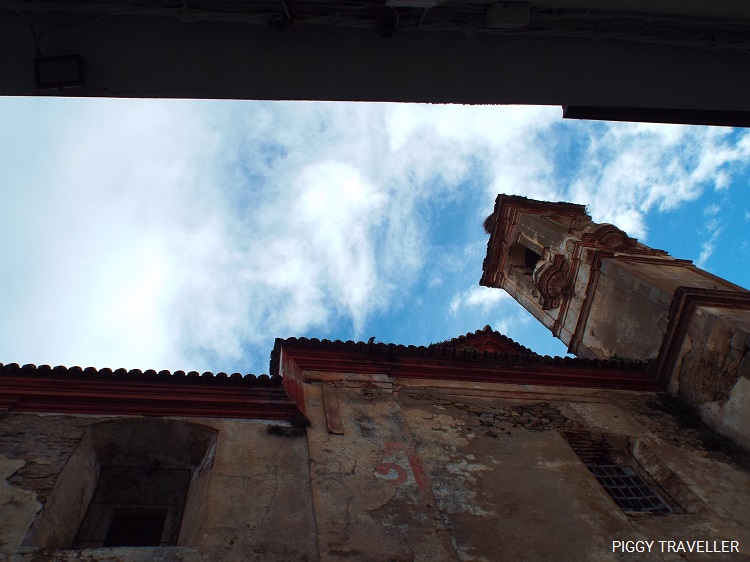 Walk back to the main square if you fancy a coffee or a drink.

See all places mentioned in the post on the map below:

A local businessman from Fregenal was the person to make the first phone call in Spain in 1880. He used two phones he bought on his trips to Paris and set up a phone line between his house and one of his houses in the country, located 8km apart.
Do you want to know what living in Fregenal is like? Read the experience of New Yorker Casey, who lived in Fregenal for eight months, and how it changed her.