A film and a book about Extremadura

You read a book or watch a film set in a specific destination, and then you can’t stop thinking about the place. Has it happened to you? Has a book or a film sparked your curiosity for travelling somewhere new? Are films and books part of your pre-trip learning process? Then you’ll like what I’m bringing to you today in this article.

Travel guides are useful to get an overview of a destination and have practical information and maps at hand, while films and literature provide a deeper understanding of a place.

Whether you’d like to learn about rural Extremadura’s recent past, practise your Spanish or watch a different film, write down these suggestions below.

It’s a drama, and it’s sad, so try to do or watch something fun afterwards to get rid of the sour aftertaste. The film is based on a famous novel by Spanish writer Miguel Delibes. Released in 1984, it’s now considered one of the best Spanish films of all times. It was a huge success and the two main actors, Alfredo Landa and Francisco Rabal, both won the Best Actor Award at the 1984 Cannes Film Festival.

Los santos inocentes is set in rural Extremadura and was filmed in Mérida, Zafra and Alburquerque. It realistically depicts what life was like in the sixties for peasant families living in the countryside and working for rich landowners. Through the story of a poor peasant family, the film examines many aspects of the society back then – social inequality, the generalised lack of education of the lower classes, the exploitative treatment and humiliation of the rich families towards peasants…

The trailer below (in Spanish) will give you an idea of what to expect.

As I mentioned above, one of the filming locations is Alburquerque, the town where nearly all members of my family come from. The news that famous actors Landa and Rabal were coming to town took the place by storm, as you can imagine. I’ve been told that Rabal spent four months with a local man to pick up his accent and manners in preparation for his role. He plays Azarías, a middle-aged mentally-handicapped man.

The filming crew chose local people as extras for some scenes. For many, the story told by the film was strikingly similar to their own life experience. One of those extras is my grandmother, who has a brief appearance in minute 56. Likewise, my father was offered some pocket money for leaving his horrific-looking shitty black car parked under a tree, so it would appear on screen.

I recently watched this film with Husband and it brought back memories from my grandmothers, both illiterate and both referring to rich families and landowners as señoritos – the way you spoke to someone from a higher social status. If you’re interested in languages and speak a bit of Spanish, you may find it fascinating from a linguistic point of view. Pay attention to how different rich and poor people speak.

If interested, you can buy the film on Amazon*.

The book: El balcón en invierno (‘The balcony in winter’) 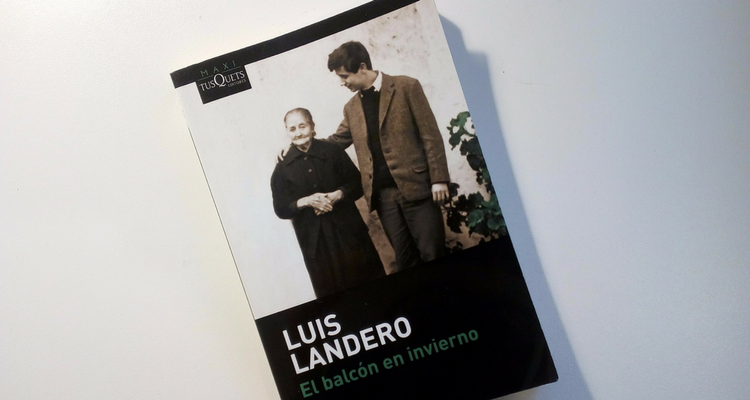 I’m afraid this book is so far only available in Spanish, but boy, if your Spanish is somewhat good, make sure you read it when you have a chance. Author Luis Landero was born in Alburquerque to a family of labourers and moved to Madrid when he was eight years old. This book is an exciting autobiographical account of his childhood in Extremadura and growing up in Madrid. It talks about members of his family, about memories and daily life events. It talks about how his father’s death changed him and turned him into a good student. And it reflects on how a young man born in rural Extremadura to a family where almost everyone was illiterate and growing up in a house without books discovered the world of literature and ended up becoming a writer.

I read it avidly over the course of two rainy afternoons, and I loved it. It uses simple everyday language, with fantastic descriptions of things, people, places and events. This is quality storytelling at its best.

I must admit that, even though the author is well-known, this is the first book of his I’ve read, but it certainly won’t be the last.

Buy the book on Amazon*

This article includes affiliate links. If you click through and book using those links, I will receive a small commission, at no extra cost for you. Affiliate links help me cover some of the costs of running this blog without resorting to other more aggressive (and annoying for you) techniques, such as ads or sponsored content.