What to see in Alburquerque: Castillo de Luna

If you drive to Alburquerque, the first thing you will see is the castle. It is located on top of a hill in the sierra de San Pedro mountain range, overlooking the town and it is certainly the number one local attraction.

It has been closed for six years to undertake works to build a hostel in the castle’s bastion, but the project was recently cancelled due to a lack of funds and the castle reopened to the public last year. I visited the castle when I was little, so you can imagine my excitement during my last trip back home knowing I would finally go back. 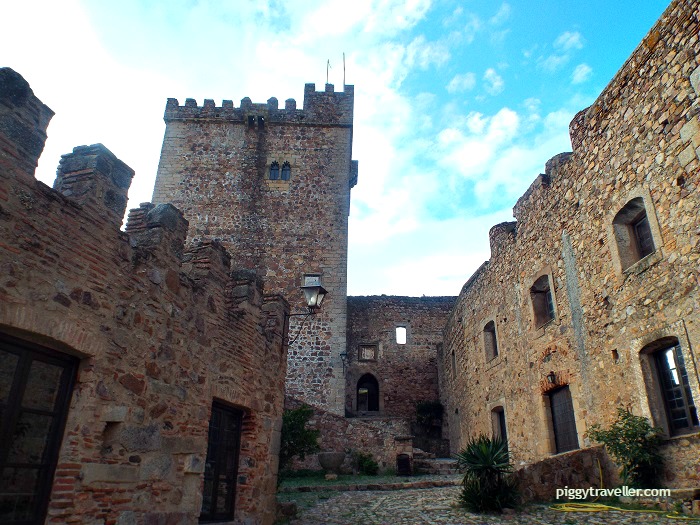 Torre del Homenaje, as seen from the patio at the entrance.

You cannot visit the castle on your own, but with an official guide provided by the local Tourist Office. The visit lasts about 45 minutes and the entrance is free. Unfortunately, it’s only available in Spanish, so I would recommend popping into the Tourist Office to take some leaflets in English and double-check the timetable.

Alburquerque (located only 14 km away from the Portuguese border) has taken part in a number of wars against Portugal and its location was of upmost importance as far as defending the area was concerned. According to the guide, from the castle you can see 60 km away on a clear day. 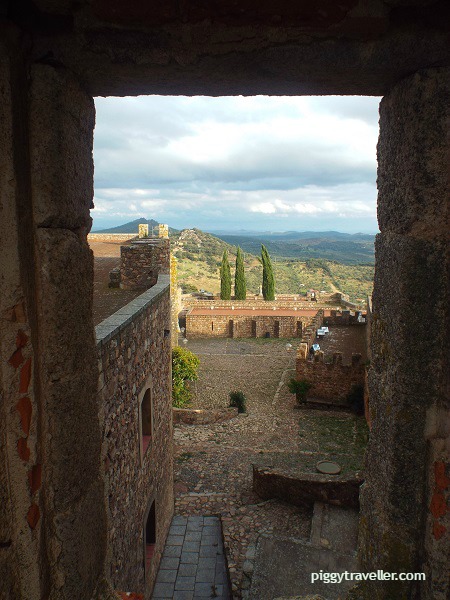 Patio at the entrance, as seen from the first gate.

The castle is named after Álvaro de Luna, one of its owners during the 15th century (the castle dates back to the 13th century). He was in charge of a number of extensions and refurbishments, which included building the impressive Torre del Homenaje (the tower you can see from the main patio). When you access the second patio you’ll be able to see a really cool five-sided tower (Torre de los Cinco Picos). Both towers are connected by a drawbridge. Therefore, in the event of an attack, the torre del Homenaje (where the owner lived) would remain completely isolated. 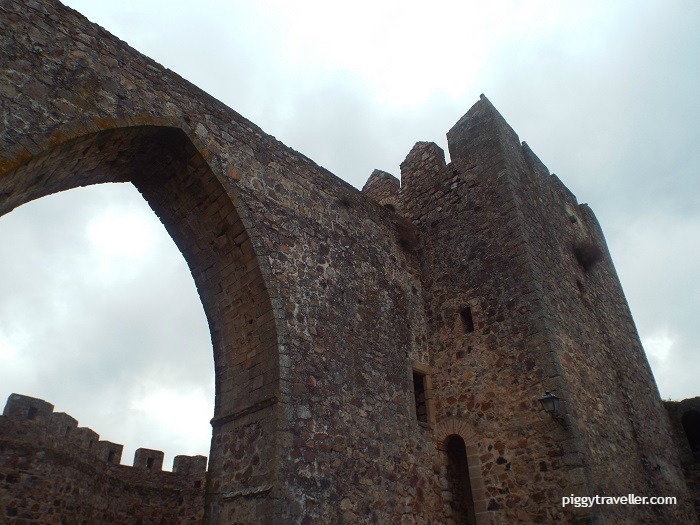 The five-sided tower and the bridge.

You will also go down to the dungeons, where prisoners were kept in the worst damp conditions. Apparently, if the guards were too lazy to take the prisoners down to the dungeon they lowered them through a hole in the patio floor using a rope. Oh my! Marks from the ropes on the stone can still be seen today.

To my surprise, both towers are very well maintained. As mentioned before, in order to access the Torre del Homenaje you need to climb up the other tower first and cross the drawbridge. The views from the bridge are absolutely stunning! 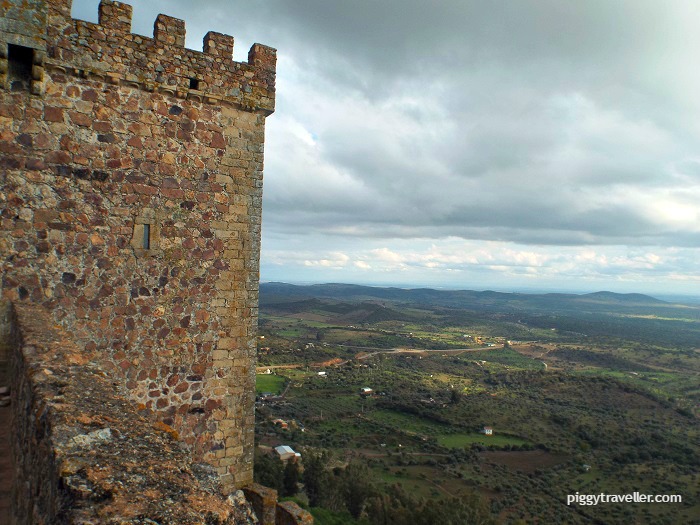 Amazing views of the ‘dehesa’ from the drawbridge.

Inside the Torre del Homenaje you can see the castle owner’s rooms and meeting room. Of course, none of the furniture is original, but it gives you a good idea of how life in the castle was. 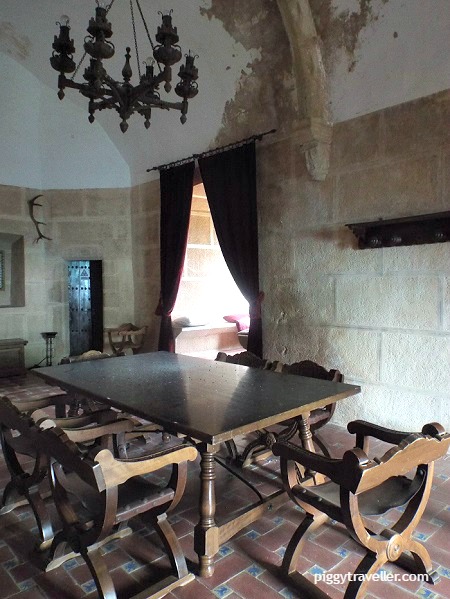 If you are tired after climbing up the first tower and crossing the bridge, do not worry – now it is time to go down! The spiral staircase will take you down to the kitchen, which is one of the highlights of the main tower. You most probably be asking yourself why on earth they built a pyramidal kitchen. Well, the reason behind it is the shape of the kitchen helped the heat from all the cooking rise up very quickly and keep the upstairs rooms warm. The heating effect was enhanced by the holes made in the upper parts of the walls. 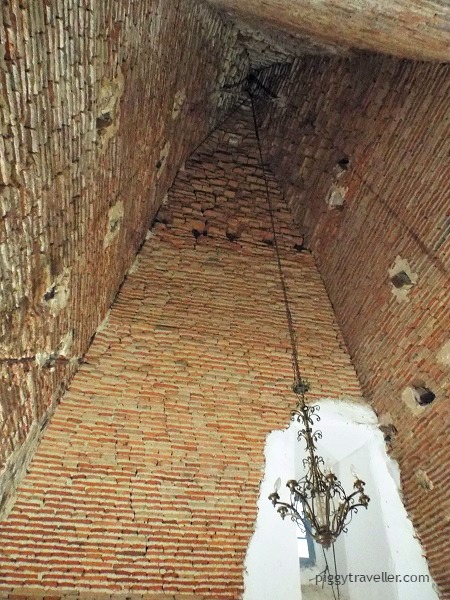 The holes in the walls helped warm up the upstairs rooms.

After seeing the kitchen you will be taken back to the main patio to visit the castle’s own church. Its origins date back to the 13th century and it displays late Romanesque and Gothic elements. It was used as a church until some 40 years ago and now only cultural events are held in here.

The tour was very good, the guide was knowledgeable and the entrance was free. I can’t really complain. The only thing that could be improved (apart from, of course, offering tours in English) is the fact that I did not have as much time to take pictures as I wanted. I did, however, manage to take this awesome picture below from the five-sided tower as the sky was clearing up. 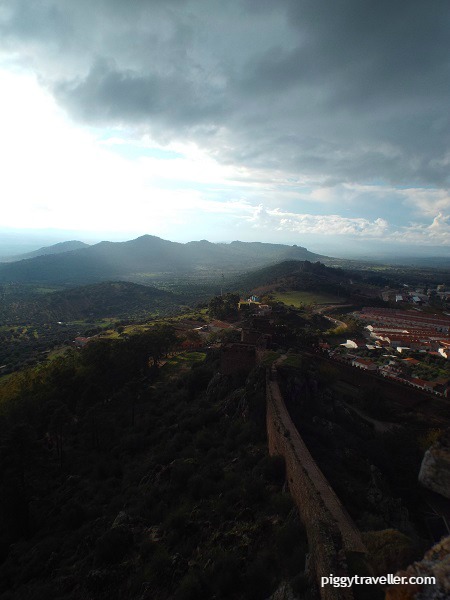 After some dark, threatening clouds, the sky was finally clearing up.

The castle on a map