When to go to Extremadura – Events calendar 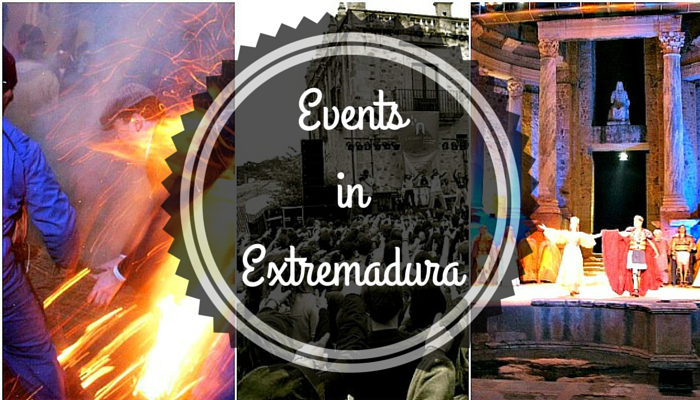 Thinking about when to go to Extremadura? Maybe just looking for an event to add to your list of quirky adventures in Spain? I collected some of the most relevant events happening in Extremadura during the year. Nature, theatre, music, religious celebrations or quirky traditions. You choose!

Event: Jarramplas
Where: Piornal (Cáceres)
When: 19–20 January
About: A guy dressed up as a demon and wearing a very particular and colourful costume, walks around the town playing a drum while the locals throw massive turnips at him.

Event: International Birdwatching Fair
Where: Monfragüe National Park (Cáceres)
When: 24–26 February
About: This event is a must for all nature lovers. Walking tours, photo competitions, professional workshops, talks, activities for kids and other activities take place in Monfragüe National Park, a protected area where you will be able to spot black storks, vultures or eastern imperial eagles.

Event: Carnival
Where: Badajoz
When: 24–28 February
About: Apart from a spectacular parade, Carnival in Badajoz is all about celebrating and partying hard in the street until late. Not only is there a party at night, but even during the day in streets and squares.

Event: El cerezo en flor
Where: Valle del Jerte
When: 19-30 March
About: the cherry trees in the Jerte valley blossom for about two weeks and a layer of white flowers cover the valley, creating a magical and visual natural phenomenon that attracts many people every year.

Event: Los Empalaos
Where: Valverde de la Vera (Cáceres)
When: 13 April
About: on Maundy Thursday there is a religious procession involving men tightly tied with a rope to a plow beam all around their chest and arms. They wear a white underskirt, a veil and a crown of thorns and walk barefoot around town. They must stop 14 times on their way, get on their knees and pray in silence. If they bump into each other on the way both people must get on their knees.

Event: Chíviri
Where: Trujillo (Cáceres)
When: 16 April
About: people from Trujillo celebrate the arrival of spring with folk dance and music, good food and drinks in the main square.

Event: WOMAD
Where: Cáceres
When: 11–14 May
About: music, dance and arts festival that takes place in Cáceres’ main square. Free entrance and you can bring your own booze with you. Could there be anything better?

Event: Contempopránea
Where: Alburquerque (Badajoz)
When: 21–22 July
About: outdoors indie music festival that takes place in ‘Las Laderas’, a beautiful promenade in the hillside of the castle.

Event: Festival Medieval
Where: Alburquerque (Badajoz)
When: 18-20 August
About: Around 2,000 people from Alburquerque take part in this festival. There are parades, street markets (they even use their own currency during the festival), knights sword fights and fights horseback, a witches’ Sabbath, music and dance. It has become a popular event in Extremadura and attracts a number of visitors every year.

Event: Festival Internacional de Teatro Clásico
Where: Mérida, Medellín, Casas de Reina, Cáparra
When: 5 July-27 August (Mérida), 28-30 July (Medellín), 3 August (Casas de Reina) and 11-13 August (Cáparra)
About: the International Classic Theatre Festival takes place in August and most of the plays are performed in its magnificent Roman theatre. However, three other Roman sites (in Medellín, Casas de Reina and Cáparra) have been added to the festival. Plays such as The Iliad, Oedipus Rex or The Pluto have been performed in recent years.

Event: Otoño Mágico
Where: Valle del Ambroz
When: Every weekend of November
About: this valley in Northern Extremadura welcomes the start of autumn with numerous activities during the month of November. Every weekend is different – concerts, workshops, theatre, walks in the countryside, competitions, fishing, sport and nature… Hundreds of people spend the first weekend of November in the countryside, eating fruits of the season (grilled chestnuts and dry figs, for example), drinking sangria and enjoying traditional music.

Event: Encamisá
Where: Torrejoncillo (Cáceres)
When: TBC
About: the legend has it that some local men managed to save their lives during the Battle of Pavia after putting themselves in the hands of Virgin Mary and cover themselves in a white sheet during the fight. Today a standard with the image of the virgin is born along a street while men on horses and covered with a white sheet await. When the standard bearer arrives to where the horsemen are people shoot into the air and bonfires are lit.

Event: Escobazos
Where: Jarandilla de la Vera (Cáceres)
When: TBC
About: everyone in Jarandilla goes to the main square wearing flame-resistant clothing and a broom. They light the brooms and ‘greet’ other people by smacking them with the broom. For three hours. After that, a man on a horse bears a standard with the image of Virgin Mary around town, followed by people that use their lit brooms as a torch.

Thanks to David, guillermo varela and amata_es for the pictures in Flickr (Creative Commons licence at the time of publication).

Have you attended any of these festivals? Which other Extremadura festivals would you recommend? Leave a comment below!