A little town with barely 1000 people, traditional architecture, a slow-paced lifestyle, gorgeous views to the mountains and located in the middle of nowhere. That sounds like the perfect rural getaway destination, don’t you think?

If you need a short break in Spain and don’t know where to go to escape from the coast and sandals-with-socks foreign tourists I have the destination for you – Garganta la Olla. You’ll probably have never heard of this place and that’s exactly why it’s the perfect getaway destination.

Let me tell you a bit more about what you can see and do in this little gem in northern Extremadura.

Garganta la Olla: what to see 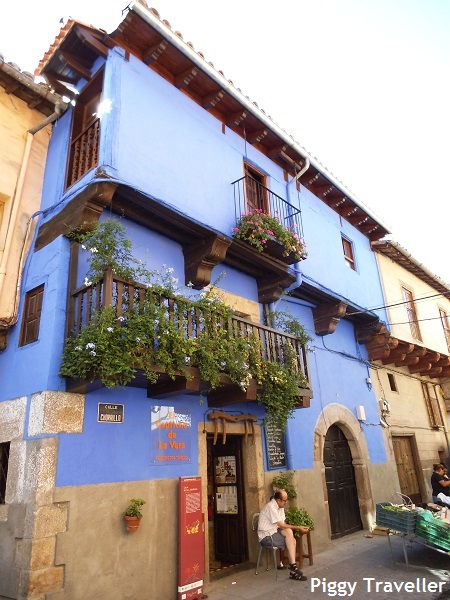 This is one of the most remarkable buildings in town and can be seen from anywhere in calle Chorrillo, which leads to the main square. The ‘Dolls House’ is known for having been a brothel back in the 16th century and regularly visited by the entourage of Emperor Charles V, who chose the nearby Yuste Monastery to spent his last days.

Although they have tried to hide its past as a brothel the building preserves quite a few unmistakable elements that prove it was a brothel —a jamb statue of a doll, its beautiful balustrade and the intense blue colour of the front. The building was painted blue to differentiate it from the rest and hint the type of place it was. 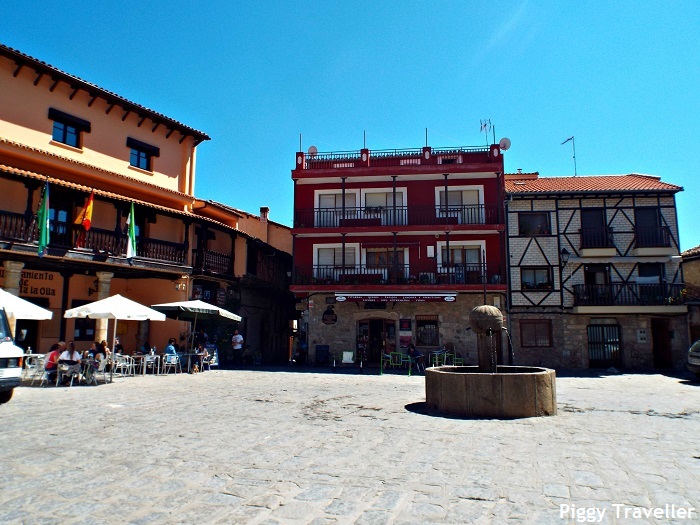 The most ‘lively’ place in town, as it is where the weekly street market takes place and most of the local bars are either in or just outside the square. The casa parroquial (parish house) was built in 1759 using money obtained after selling the Casa de las Muñecas. The square is dominated by the local town hall and a circular fountain, a classic in this area of Extremadura. 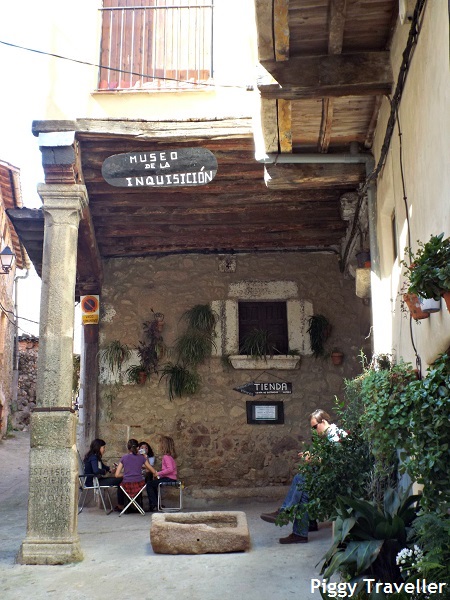 This little house-museum is located very close to the main square and is a highly recommended place to visit. You will be guided through the temporary cells, the scribe’s office, the trial room and the dungeon used by the infamous Spanish Inquisition to trial and torture heretics. You will also see some of the most horrific torture devices. Hearing the guide’s explanations on how they worked freaked me out for hours.

Some of them were the following:

Garrotte (garrote vil). It consists of a chair with where the prisoner would sit. The executioner would tightened a metal band around the prisoner’s neck with a crank and a metal spike would cut off his/her marrow. The prisoner died of asphyxiation.

The Judas Cradle (pincho del diablo). The convict was tied up with both legs stretched forwards above the cradle, a sharp, pyramid-shaped seat. The top of the cradle was inserted into the convict’s anus or vagina and the person was lowered slowly and… You can imagine the rest.

There also was an upright metal air-tight cylinder similar to the Iron Maiden, where the accused would be tortured for hours or simply left there to die. Apparently, executioners found it funny to make it roll downhill around town.

A coffin (I can’t remember its technical name) with ten holes creating a cross shape. They tied a person to a board and introduced him into the coffin for up to several weeks.

Immurement. They would open up a human-size hole in a wall, forcing a person or more to get inside and would then close the hole up again. 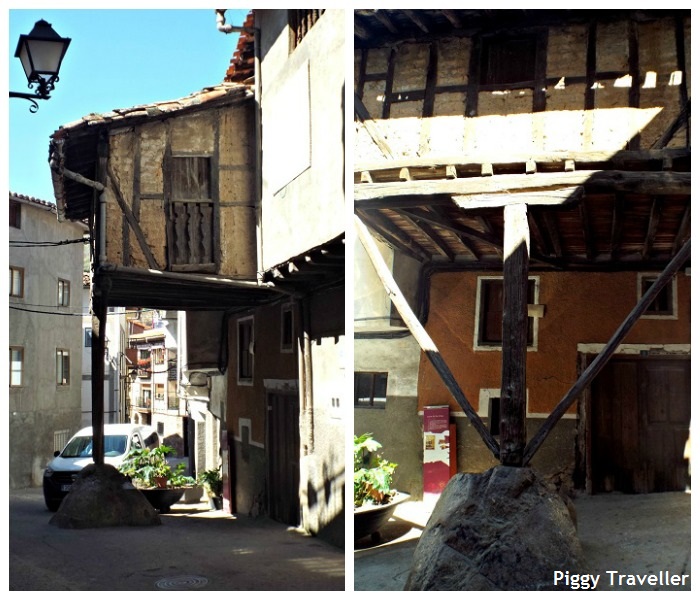 This is probably the most famous and surprising house in Garganta. It’s impressive the way they made the most of the slope where the house was built in order to build a ‘floating’ room on the first floor. The room has been built on a wooden structure and is supported by a vertical wooden structure made of three beams on top of a rock. 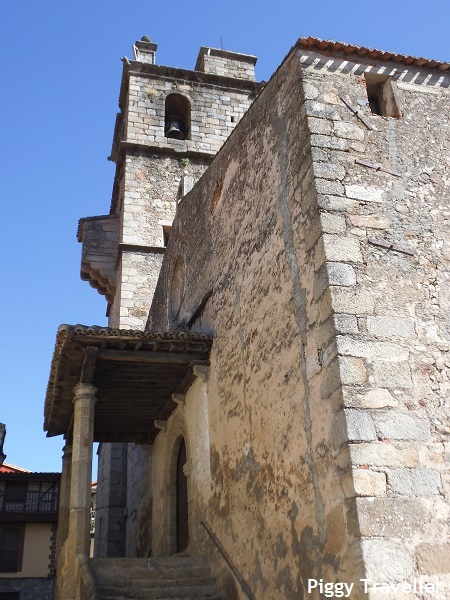 A little church located a short walk from the main square. It was built between the 15th and 16th centuries and it combines different architectural styles, such as Gothic, Renaissance, Baroque and Rococo styles. 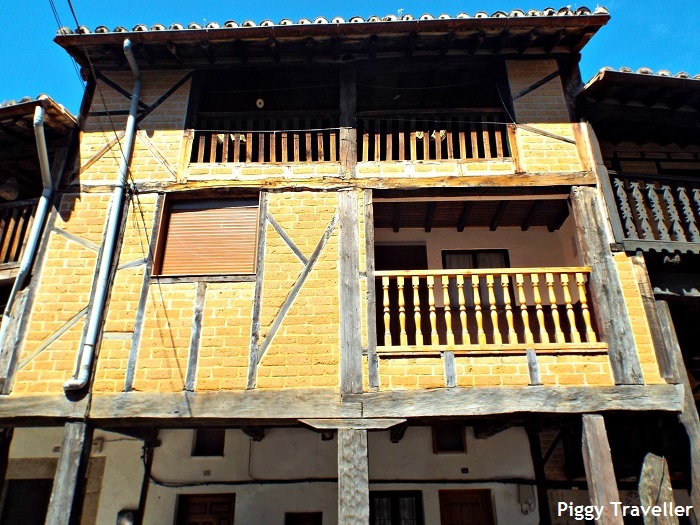 It comprises the area past the main square and here you can see the best examples of traditional rural architecture. Lose yourself in its little streets and pay attention to the details in many houses, such as ornaments in their wooden balconies or the inscriptions carved in stone over doors. 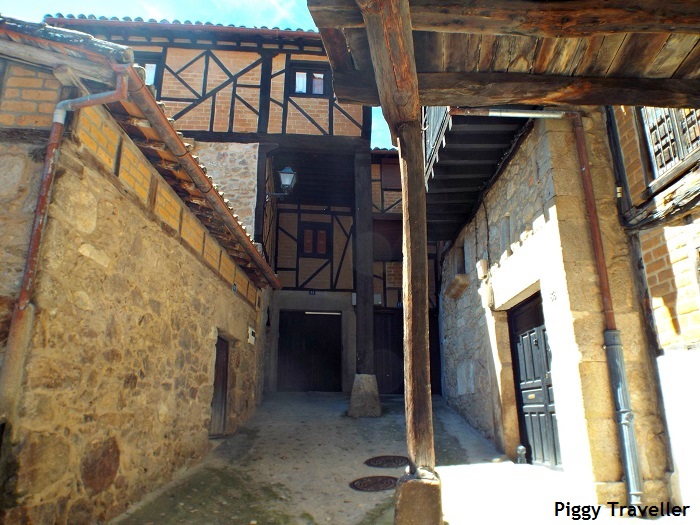 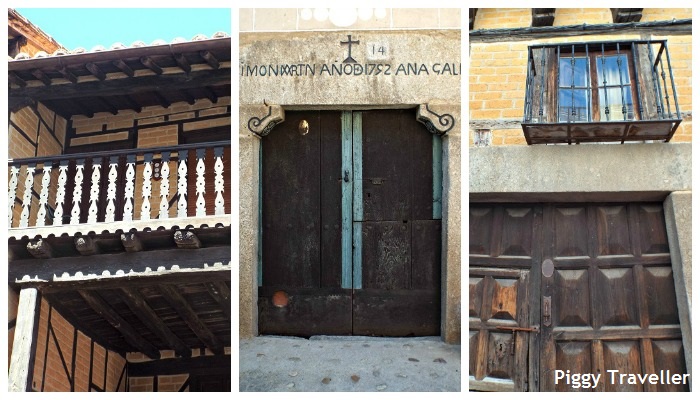 There are two other things just outside town you shouldn’t miss: 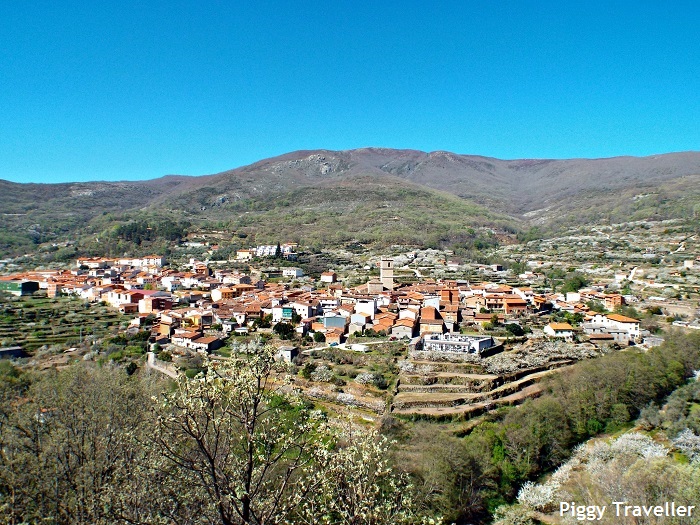 It’s a viewpoint with stunning views of the town and the mountains. You’ll find it barely 2km away from Garganta if you drive from the Yuste monastery (or just after crossing the town if you drive from Jaraíz de la Vera). A statue of La serrana de la Vera occupies the centre of the mirador. The legend has it that this woman deceived many local men into going to her cave in the mountains and then killed them. There are no parking spaces, so you’ll need to leave the car just outside the road. Make sure you leave it far from the curve and it’s visible to other cars! 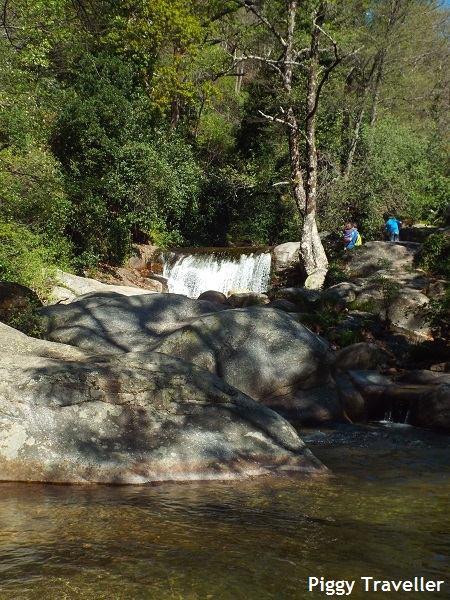 If it’s too hot to stroll around town in the afternoon there’s no better plan to cool down than having a swim, don’t you think? The term garganta is what people in northern Extremadura call the little rivers in this area. Garganta Mayor is the river that runs down the mountain just outside town and it’s crossed by the main road (the same one that takes you to the mirador de la Serrana).

There are several areas where you can swim, but the two nearest to town are Piletillas de Arriba and Piletillas de Abajo, located in each side of the bridge. In Piletillas de Abajo there’s an area to chill out in the shade and there’s even a bar. You can also walk up the river and find a place with no people around and a nice little pool you can enjoy on your own. You decide! 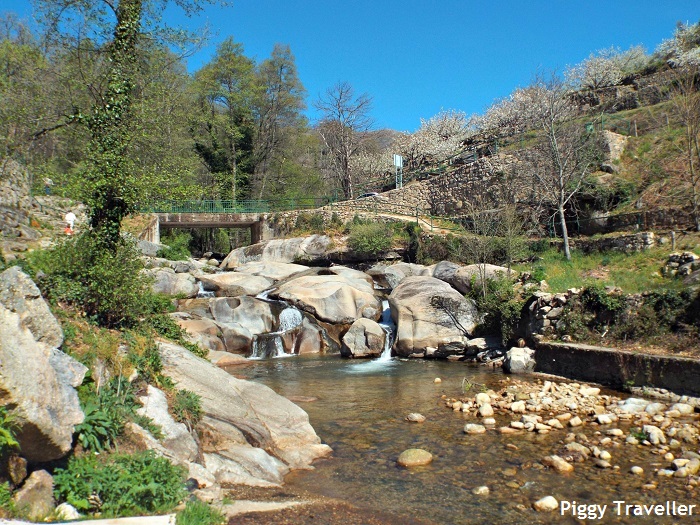 Garganta la Olla: where to eat

Read my impressions about eating at Restaurante La Fragua, a small, family-run restaurant just off the main square.

Garganta la Olla on a map