Romangordo: painting village life one house at a time

Romangordo was the rural highlight of my latest trip to Extremadura. Who would have thought that a small town of 256 people is home to such an array of cool urban art? I found out about it on social media only a few months ago, and last month I went to see it with my own eyes. And, oh boy, it’s quite something! 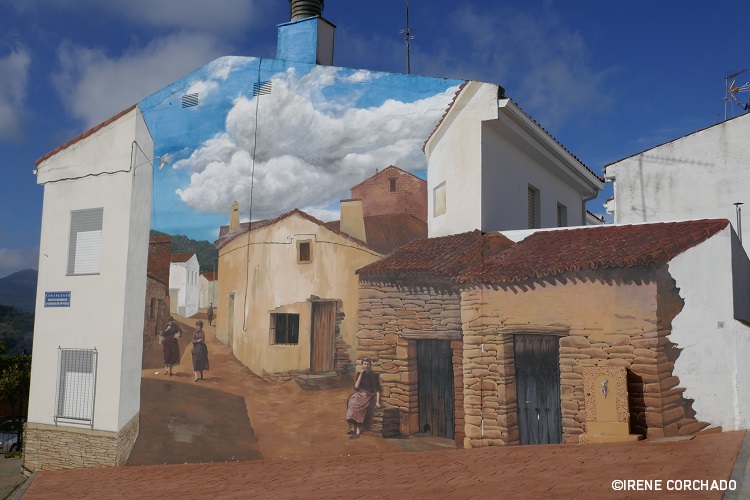 Romangordo is located in Cáceres province, about halfway between Navalmoral de la Mata and Trujillo, and within Monfragüe Biosphere Reserve. It’s also close to another UNESCO protected area – the Villuercas-Ibores-Jara Global Geopark. If that isn’t a good enough location, Romangordo is easily reachable from the A-5 motorway, which makes it a good place to stop on your way down from or up to Madrid.

Putting Romangordo on the map: the urban art projects

In 2016, the local authorities found a way to put otherwise unnoticeable Romangordo on the map with two urban art projects that have become a great tourist attraction. The first project involved painting walls, and the second one involved painting garage doors.

Muro Crítico (literally ‘critical wall’) is the group of extremeño urban artists who took on the task of telling Romangordo’s life and history through art. In order to do that, they used graffiti, murals and trampantojos  – a visual illusion created by integrating the painting with the surroundings so well that it’s hard to know whether it’s a painting or the real thing.

The works depict rural life through everyday scenes representing traditional trades, food, folklore, nature and even real local people. So far, there are over 60 works of art, and new works are added regularly, so even the most updated brochure you can get will probably not show them all. Still, I think it’s a good idea to pop by the visitor centre at Casa de los Aromas (see end of the post for details) to ask for information about the latest additions.

Sticking to the route on the brochure I got was very hard. I kept getting ‘distracted’ by works of art I could spot from wherever I was, and went off-piste quite a few times. To be honest, forgetting about the brochure may also be a good idea, if you aren’t in a rush and want to simply enjoy wandering around and stumbling upon (instead of looking for) the art works.

Here’s a selection of works you can see in Romangordo with short descriptions of the scenes depicted. I hope it’s enticing enough while not giving everything away. 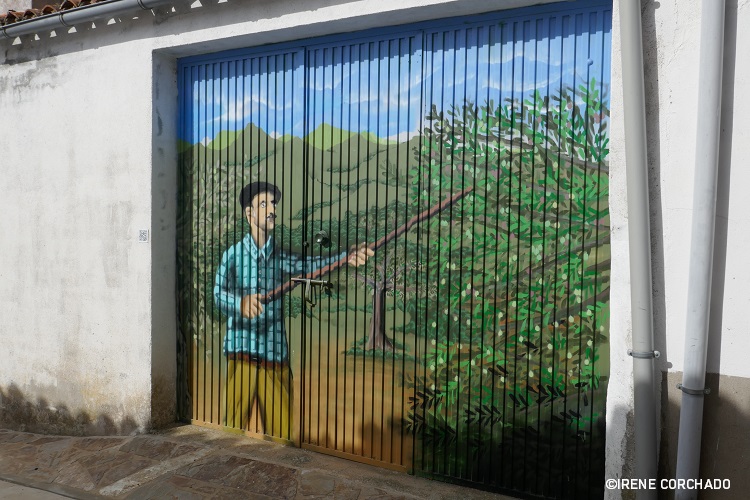 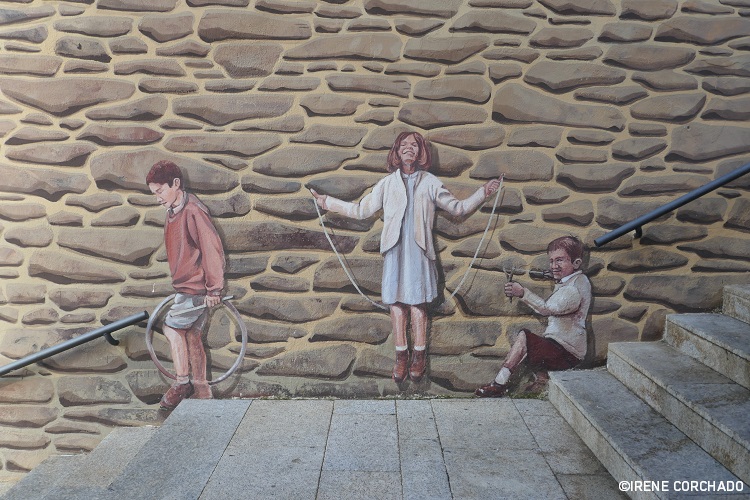 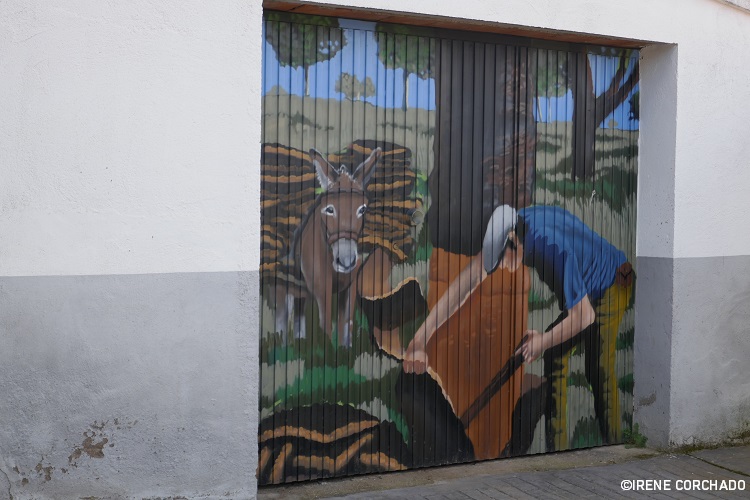 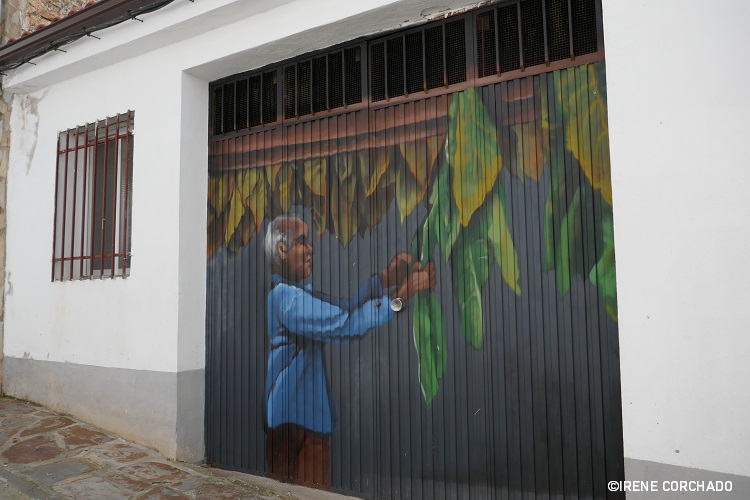 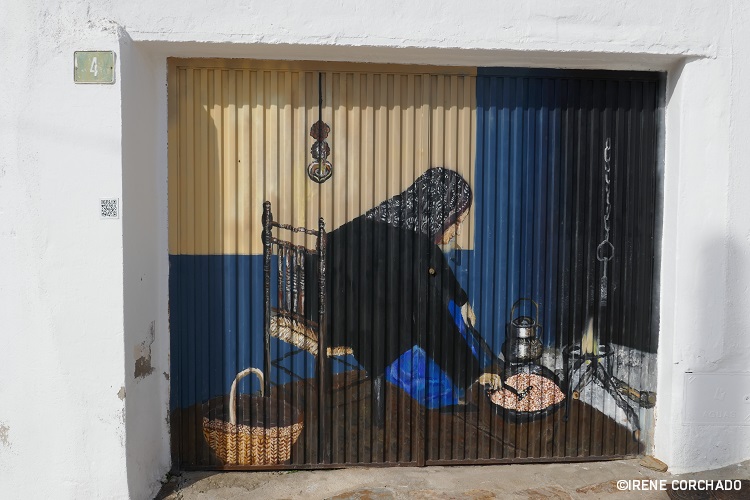 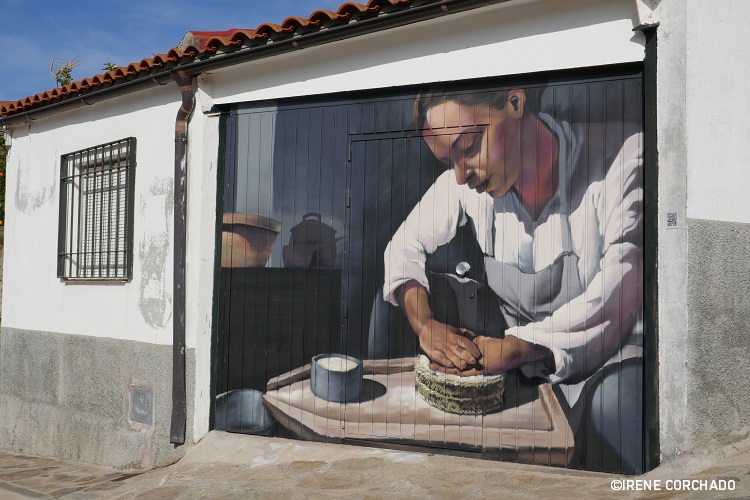 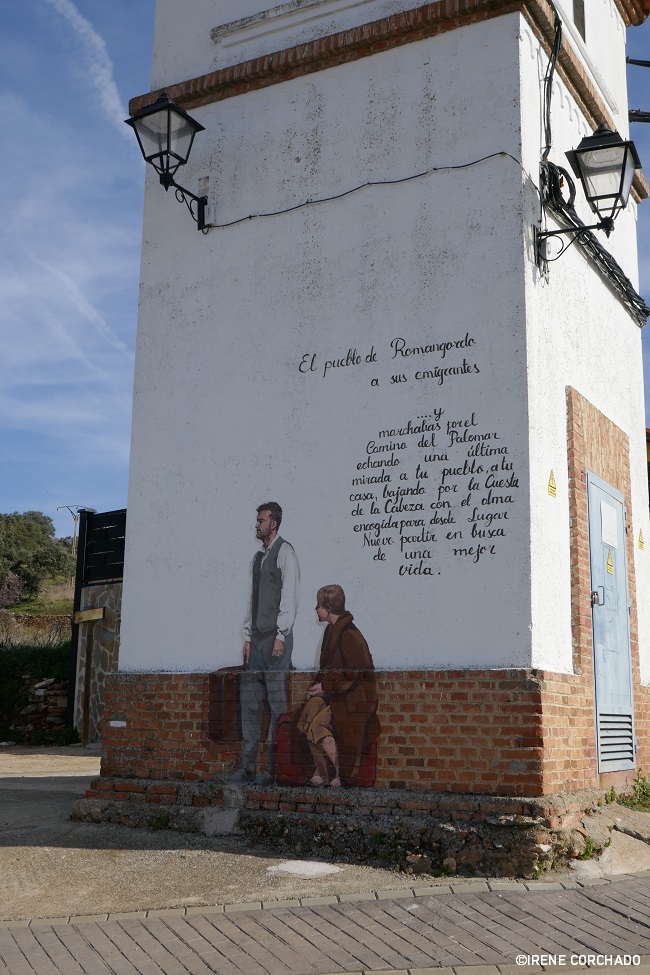 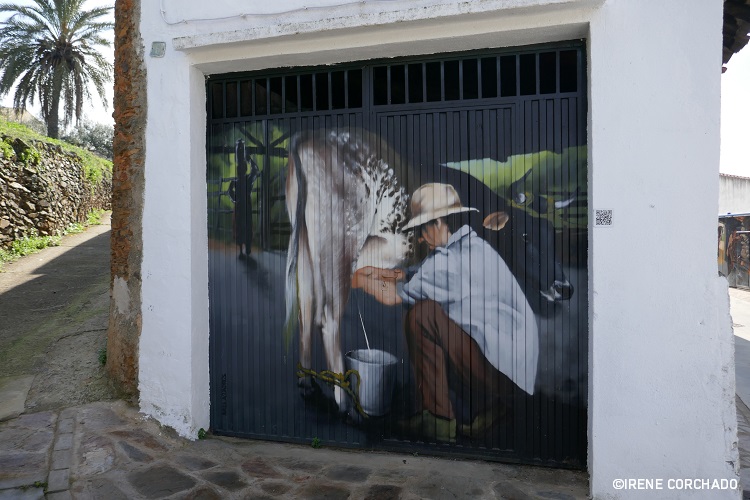 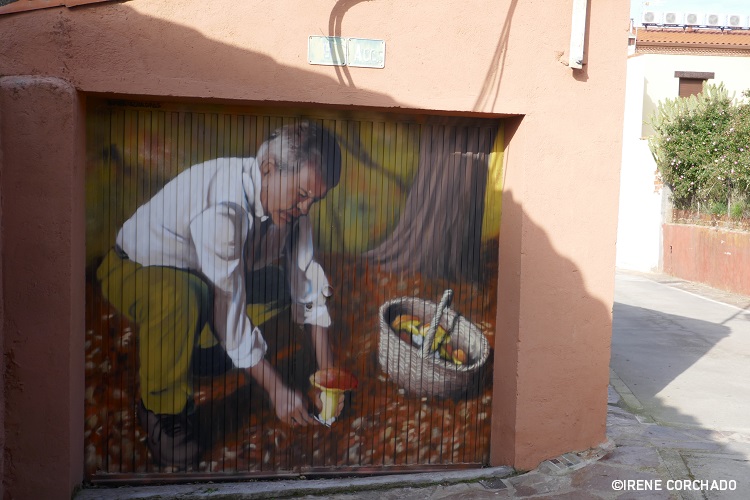 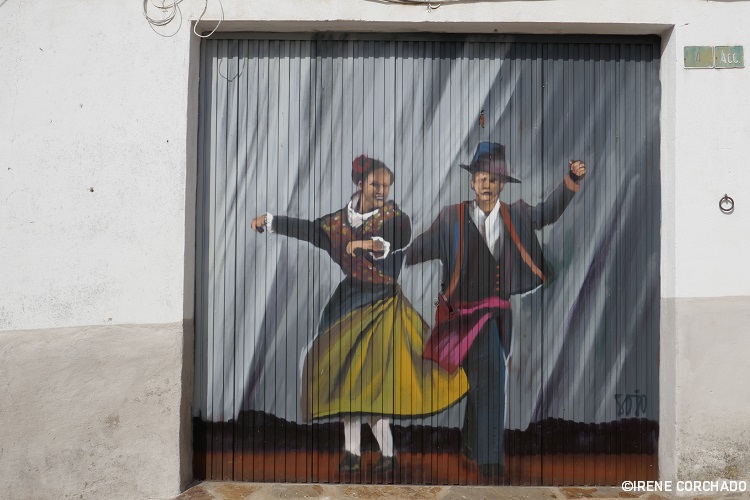 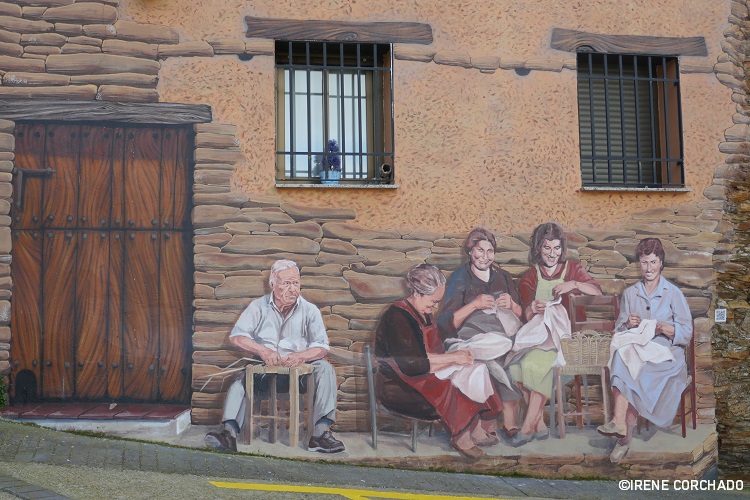 Sewing and the stool maker. 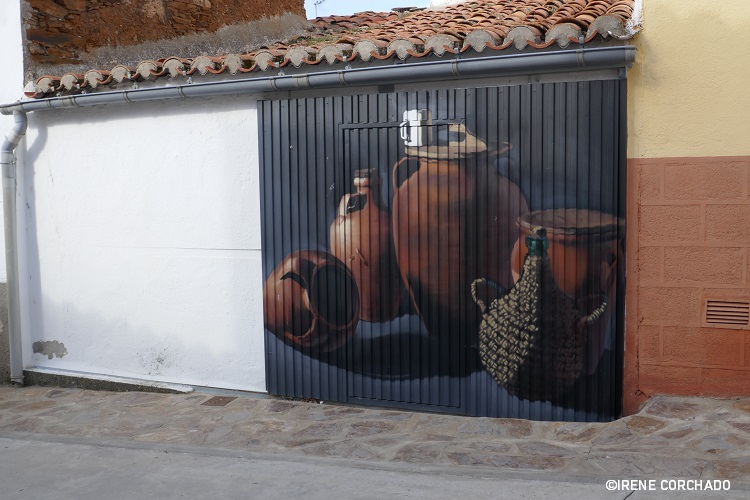 The donkey corner. This is one of the most impressive art works (the picture doesn’t show it in full on purpose.) 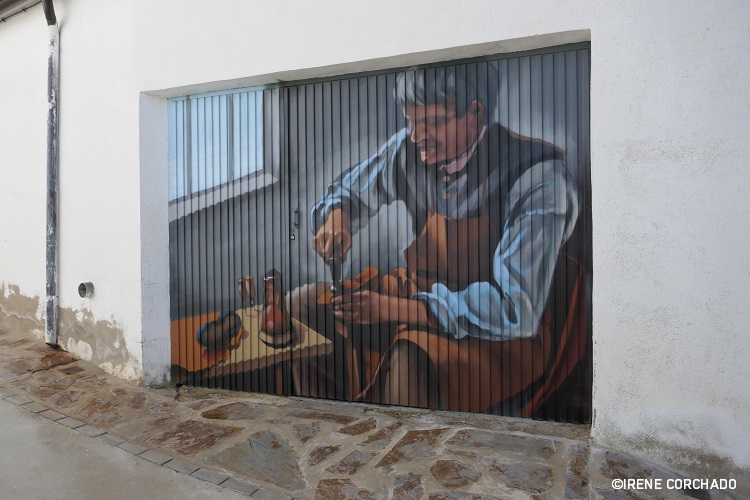 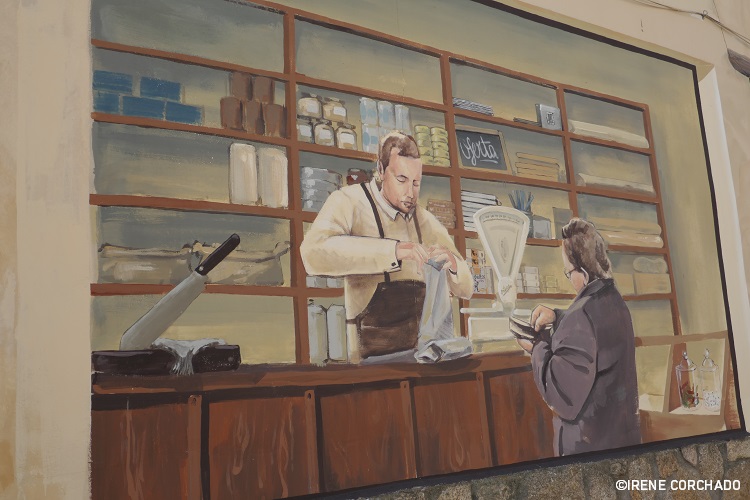 What else to see in Romangordo

You’ll probably see it during your urban art expedition but, if not, walk down to the main square for a pretty village plaza snap and to see some original statues of children playing leapfrog ring-a-ring o’ roses. Santa Catalina church is off the main square (closed when I went). 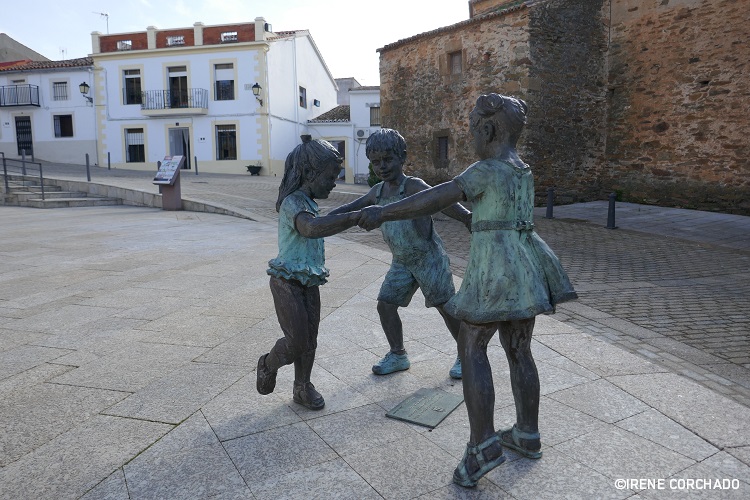 Casa del Tío Cáscoles. This traditional house formerly owned by a local couple was turned into a museum and gives the visitor a good idea of how life was in town and in this type of buildings. Visits are arranged at Casa de los Aromas (see practical info section below).

Ruta de los Ingleses Centre. Here, you can learn about an important battle that took place in the area on 19 May 1812 during what is known in Spanish as Guerra de la Independencia (Spanish War of Independence, 1808-1814). If you like walking, you may want to join the 16-km historical reenactment route that is organised every year in May (this year, it takes place on 18 May).

Nearby places you may also want to visit: