Churros: getting it right 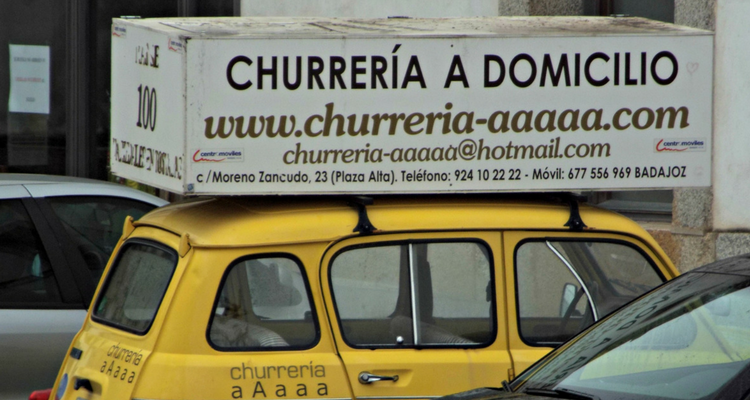 I know. Churros are not exclusive to Extremadura, but I thought the blog would be the best place for me to talk about this. This Spanish snack enjoys such popularity in the UK that the term is already included in the Oxford dictionary, and I don’t even have to italicise it.

There are two clichéd ideas you need to ditch:

1. They are a typical breakfast for Spaniards

Although you can think of churros as something typically Spanish, they aren’t a classic breakfast option, not even a popular one. They should be considered more of a treat. Think of lazy winter Sunday mornings, for example.

2. They are eaten all year round

Wrong. They are deep-fried hearty and greasy snacks that are usually served with thick hot chocolate. It’s a winter thing. Spaniards do not generally eat churros outside the winter season, in the same way we don’t eat turron outside the Christmas period or drink sangria at all.

Churros are too filling and heavy to have them all year round. Yet, I’ve seen foreign tourists having churros in July. In Seville! And I’ve seen pictures on Instagram with captions mentioning how they’re trying to do traditionally Spanish things during their summer trip to Spain. That’s not traditional. That is brave, daring, suicidal. They could have had a heart attack or something. Or, at least, a terrible heartburn.

One sign that we don’t eat churros out of season is the fact that many churrerías (churros shops) close at the end of winter.

Now let’s have a look at some truths:

Churros are thin deep-fried dough pastries in the shape of either a stick or a knot. However, there is another member of the family – the porra, a thicker and longer (and better) version. In my area, we call porras ‘churros’, and churros are often referred to as ‘the thin ones’ or ‘the shitty ones’.

When to eat them

Churros are generally eaten for breakfast, but not only. In my house, for example, we sometimes have them for dinner on rainy weekend evenings. Still, we don’t eat them as often as people think. It’s a comfort occasional food. A very popular tradition is having churros for breakfast on New Year. It’s almost a ritual. You spend the night out celebrating and, go to a local churrería before heading back home. You queue (there’s always a big queue waiting for the place to open at 7-8am) to enjoy this greasy, yet delicious guilty pleasure.

How to eat them

The classic drink to have with churros is thick hot chocolate, which is something I miss from Spain. When you order a hot chocolate in the UK, you get a watery cocoa powder-flavoured drink. Spanish hot chocolate isn’t made with water, but with milk only. Café con leche is also a popular option, but trust me, chocolate is way better for dipping.

Where to eat them

There are two usual places where you can enjoy some churros. You can go to almost any bar or café or to a churrería. Going to a bar/café means that, in most cases, churros are frozen. If you want to have freshly-made churros, go to a churrería. Some of them are also coffee bars, so coffee and hot chocolate will be available. Note that many churrerías are shops only, and churros are sold to take away. If you want a filling breakfast to get over your hangover or a lazy wintery dinner to enjoy sitting at the camilla table in front of the TV on a rainy day, then this is it.